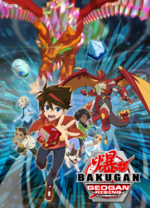 Additionally, certain Bakugan from earlier seasons of the Reboot that were not released, such as Ventus Cyndeous Ultra, will be released during this season. Cubbo also saw a large rerelease with new "costumed" variants.

The Bakugan show will continue for a third season with a total of 52x11min episodes per segment; and it began airing on January 24th 2021 on Teletoon Canada. The show also became available Netflix on April 15, 2021.