Difference between revisions of "List of Bakugan Battle Planet Episodes" 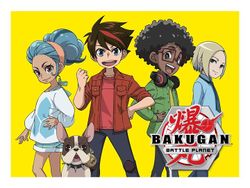 This is an episode list page for Bakugan Battle Planet, the first season of the Bakugan reboot. The season follows the adventures of Dan Kouzo and his best friends, the first kids on Earth to bond with the mysterious alien creatures known as the Bakugan. The storyline will revolve around friendship, battling, and competition.

Unlike the original series, each episode is 11 minutes (rather than 22). Each block consists of 2 11-minute episodes, the series is currently airing on Cartoon Network every Saturday at 7AM ET. It is currently on break after the mid-season finale, Awesome vs. AAAnimus, Part 1 & 2. The series has 100 episodes (or 50 22-minute episodes).

The series officially aired the first 4 episodes on December 23rd, 2018 and has started airing 2 11-minute segments/episodes every Saturday since January 5th, 2019. The series will have 100 episodes, or techincally 50, as you can classify each segment as 1A and 1B for episode 1 for example.