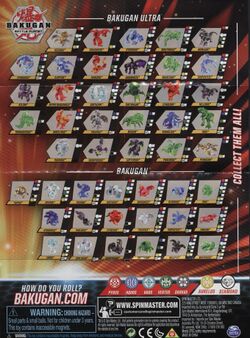 This page is a listing for all known Bakugan Battle Planet waves and what products were released in those waves (or "mix")[1]. This page will include the Single Packs, Starter Packs, and more. Some images have placeholders because some products have been seen, but there is no high quality image for it.

Note: This list is only for Waves from the U.S/Canada release

Wave 5 is not yet available, but the Bakugan Ultra products have been sold early to people who visit the Bakugan booth at Momocon 2019.

It is unknown what wave these Bakugan will be released in.