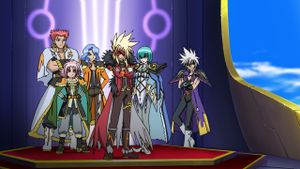 The Vexos; an organization of Vestals.

This article is about the alien race. For the planet, see Vestal.

The Vestals (ヴェスター, Vu~esutā?) are a humanoid alien race that are almost identical to humans, except for the eyes.

Vestals look similarly to humans, with the difference of emotionless, glazed eyes, which their pupils have colour and have no glare (non-reflective). This is a result of the iris in the eye looking clouded over and glazed. There are also differences in athletic ability and hair color. Vestals breathe air like humans do, so this suggests that Vestal is a parallel Earth or at least a planet with similar properties.

The cities built by the Vestals apparently consist of large, technologically advanced skyscraper like architecture vaguely comparable to the Space Needle in Seattle, Washington, however there are notable buildings more like small houses such as Baron's House. Not all of these cities are well kept such as Volt's home town. These cities also have large amounts of vegetation in the cities. Although this vegetation is clearly controlled, it is comparably more than found within Earth's cities, suggesting that the Vestal inhabitants are environmentally friendly. Despite this planet having an overpopulation problem, much like Earth but on a more full-scale degree, this may be explained by the large amount of breeding seen in families such as Baron's. Therefore, cities are now being built underwater and in the skies, even in space and on other planets such as New Vestroia to alleviate the overpopulation.

Some of the Vestal's most impressive feats are their technological feats, with Professor Clay, Mira's father, being one of the most prominent inventors in Vestal, accomplishing the creation of large machines in a short amount of time. They have also mastered both space and dimensional travel.

Although Vestal technology is more advanced than human technology, the Vestals don't have amusement parks, yoga, juice in boxes, pajamas, aprons or bathtubs. This might mean that Earth is just more on fun and relaxation than they are.

Although most aren't evil initially, they did not know the powers of Bakugan and believed them to just be animals or toys. This is similar to what happened in the beginning of season 1, when the humans thought that Bakugan was just a game. This all changed after the Vestal half of the Resistance went on television and spoke of all of the lies the royal family was telling. It appears that the majority of Vestals are a peaceful race, believing the broadcast and forcing the royal family off Vestal but not taking action when they noticed the Vexos' return.

It is to note, that Vestals are different from humans by their eyes, because they have a colored pupil and no shine (which is usually used when drawing anime eyes).