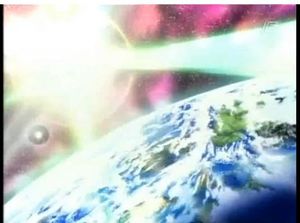 Vestroia was first a single spherical planet that originated in the emptiness of the dimension Vestroia. It is unknown exactly how, but soon after a fragment of Earth traveled to Vestroia, a chain reaction on the planet created life. It was a colorful planet that boasts crystal lakes, sunny days, rock formations and green fields.

After several centuries of adaptation the creatures on Vestroia had obtained vast knowledge of their dimension. One day a burst of positive energy out of nowhere hit the planet, giving the creatures separate attributes:

The Doom Dimension later appeared as the graveyard for all of the Bakugan.

The destruction of Old Vestroia came, when a group of Gargonoid decided to start war among the Bakugan. The war spread and various Bakugan tried to stop it but were either slaughtered or taken to be used as practice targets. Eventually a group of Bakugan one of each attribute split the world into six separate worlds based on the attributes of the Bakugan. This made some Bakugan go off to other places such as Gundalia and Neathia. The Bakugan who saved Vestroia went on to be known as "The Six Legendary Soldiers of Vestroia". The Soldiers captured all negative power in the dimension and used their positive energy to help keep the negative energy in check, this was the formation of the Infinity Core and the Silent Core. While their actions saved Vestroia, the Legendary Soldiers used the last of their energy to do so and ended up in the Doom Dimension. They could appear at any time in the dimension of Vestroia.

Vestroia is composed of six worlds which correspond to the six attributes of Bakugan:

The Bakugan came to Earth when the human dimension and Vestroia collided with each other. That caused many Bakugan and cards to fall down to Earth.

One day Naga created his version of Vestroia: 2 from 6 worlds merged into 3, creating his gatekeepers.

The Bakugan who guarded the worlds, called the gatekeepers, were:

After Naga was defeated, Drago went to the center to restore it.