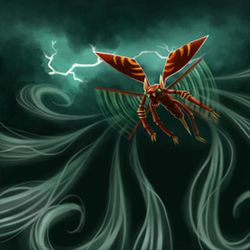 An example of an Interrupt Defense.

Interrupt Defense was a type of defense on Bakugan Dimensions, where the opponents attack can result in things like being dodged, moving to a different range, giving a counterattack, etc. Although most Interrupt Defenses are Dodge Backs, not all of them are. For an example Steady Advance, Avalanche Rush and Growing Storm etc. There are also interrupts that can be a combination of interrupt types. Some attacks for example, Flaming Uppercut ignores Interrupt defenses. When these attacks are used, the attack will hit and will not be subject to any effects of the interrupt.