Bakugan Dimensions was a beta MMORPG created by Spin Master that ran between June 1, 2010 - June 30, 2011. It allowed players to create avatars, explore the game's world, and use Bakugan (either provided in-game or purchased in real life) to brawl non-playable characters and other players. It contained characters from Bakugan: Gundalian Invaders, though the game was largely set independent of the game's timeline.

At the beginning of the game, after the character creation menu, players were supplied with three default Bakugan in their chosen Attribute. They did not gain experience and levels as quickly, but could be used without making any purchases. To acquire additional Bakugan, DNA Codes found on real-life Gundalian Invaders and Mechtanium Surge Bakugan toys could be inputted into the game to acquire their game versions.

Bakugan Dimensions mainly had the players stay in Bayview. Players could travel around by clicking their mouse on their destination, or using the Arrow Keys. To travel to a different area, a player would click on the map. There are five main areas:

At the in-game DNA consoles, entering the 10-digit DNA Codes found on Gundalian Invaders or Mechtanium Surge Bakugan would add them to your in-game collection. The special 3-digit codes found on BakuMeters would give your avatar a BakuMeter accessory and some Clear Bakugan. All Bakugan entered started out with 400 Gs, with the exception of Colossus Bakugan which started out with 650.

For each DNA Code entered for a Bakugan already owned in-game, it would gain 25 Gs. If you entered a pre-released Bakugan, you will receive BakuCoins unless Spin Master entered the code into the system. 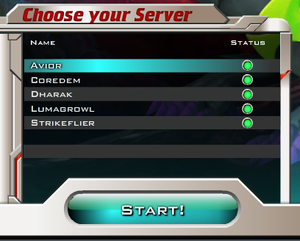 Servers were used, as with most MMOs, to prevent overcrowding. The available servers were listed in alphabetical order and were named after Bakugan.