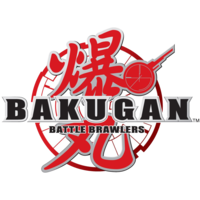 Bakugan (爆丸, Bakugan?) are creatures from an alternate dimension called Vestroia, along with the worlds of Neathia and Gundalia. It is also a game that uses these Bakugan. The kanji for "Bakugan" reads "exploding sphere".

A long time ago, a mysterious force known as Code Eve constructed the first two Bakugan; Dharaknoid and Dragonoid, based off genes from an unknown ultimate warrior. The two of them ripped their home universe into two separate realities. One contained the six attribute worlds of Vestroia, and the other Neathia and Gundalia. Vestroia was seeded by the Dragonoid, while the Dharaknoid seeded Neathia and Gundalia. In time more Bakugan emerged, and their origin was lost to legend. At the start of the series, only two full descendants of the original two remained, though all Bakugan are descendants of them.

One day, strange cards with Bakugan inside of them, fell from the sky on Earth and Vestal, because the Silent Core was stolen and the Infinity Core fell to Earth, creating a rift between dimensions. Within were the Bakugan, in ball forms. Dan and the Brawlers worked together to make rules for a game that used the Bakugan on Earth. They cannot take on their true form (as they were in Vestroia) in the human dimension, and take on the form of a sphere that pops out (or stands) into a miniature form. However, they can assume their true form when a Bakugan game is played.

These games start when the players shout "Field, open!", at which time stops. The game ends when someone wins.

Bakugan take many sizes and shapes, and generally comes in six Attributes, Pyrus, Haos, Subterra, Darkus, Ventus, and Aquos. Additionally, Naga and Wavern in the anime are referred to as "White Ones". See Attribute.

Naga is the evil Bakugan who opened up the Vortex from Vestroia to Earth. At the end of season 1, the six attribute worlds of Vestroia were merged into New Vestroia, with a noble Dragonoid as its new core.

Three years after New Vestroia formed, it was discovered that the Vestals had colonized the planet, and subjugated the Bakugan. Drago separated himself from the core, and with help from five new heroes, managed to save Vestroia from the Vestal colonists, and later the Bakugan Termination System; a device made to destroy Bakugan. Around this time artificial Bakugan were developed; Mechanical Bakugan by the Vestals, and Synthetic Bakugan by humans using Phantom Data.

A year after that, it was discovered that Bakugan are native to two other planets; Neathia and Gundalia, who were currently at war. Neathian and Gundalian Bakugan naturally have almost three times the G-power of Vestroian Bakugan, but lack the natural ability to evolve. As Drago and his human allies ended the war, the origins of the Bakugan were revealed a little more.

In real life, Bakugan balls (and cards) are sold in stores. These balls are sometimes the same as those that can be seen in the anime. There are nine types of Bakugan: BakuCore, Super Assault, Special Attack (which include Special Treatment), Trap, Battle Gear, Mobile Assault, BakuNano, and Mechtogan. Bakugan are made from opaque or translucent plastic and die-cast metal.

At first, the Bakugan toys were released in a 28mm size (commonly referred to as B1). Around the midway point of the first season, Bakugan began to come out with a larger 32mm size, branded as B2, to replace the smaller B1 size. While a designation for B3 exists, it is merely a classification for a series of Special Treatments during New Vestroia and is not a size increase.