Cyborg Helios (サイボーグ・ヘリオス, Saibōgu Heriosu?) is a cyborg Bakugan that is the evolved form of Viper Helios. On the official Bakugan website, Bakugan.com, and Bakugan Dimensions, it was mistakenly called just "Helios".

Cyborg Helios is an evil dragon that obeys every command from the contemptuous Spectra. Its mammoth wings allow it to move swiftly and avoid enemy attacks. Cyborg Helios has poisonous tipped thorns covering its body. From its mouth, it can shoot cannonball fire blasts with rapid speed. 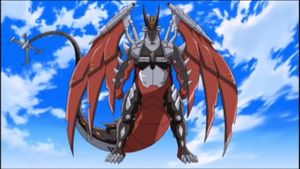 In Brotherly Love, when Spectra challenges Mira Fermin, he easily won and she asked him how much power did Cyborg Helios use to defeat her and Spectra simply answered that he only used 20 percent power to defeat his sister. In the second round, it used all of its power and defeated Thunder Wilda and Baliton really easily.

In Ultimate Bakugan, he faced Drago and won the first and third rounds (he won the third round as Maxus Helios).

In Final Countdown, he fought Maxus Dragonoid and it was a match until the next episode, Reunion, which has not been determined because the battle was terminated and he still faced Drago in a head to head fight, which ended in a draw.

In Spectra Rises, Helios was upgraded into a Mark 2 version of himself. He is the same Helios, but with more armor and more power. He can now become Maxus Helios MK2 as well.

Defenders of the Core Ability Cards:

Unlike Hades or Altair, Cyborg Helios does not seem to have any major weaknesses. However, he does have some weak points: 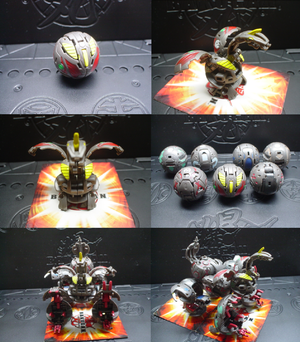 Cyborg Helios was first released as Helios in BakuBronze series, then as Special Attack Bakugan renamed Turbine Helios. It was re-released in the evil Evolution Pack in Mechtanium Surge.

In Bakugan: Mechtanium Surge, they brought back Cyborg Helios. It is only seen in Darkus, available in BakuEvolutions or Bakugan vs Marvel with Iron Man.