Bakugan: Mechtanium Surge (爆丸バトルブローラーズ メクタニウムサージ, Bakugan Batoru Burōrāzu Mekutaniumu Sāji?)) is the fourth and final season of the anime series Bakugan Battle Brawlers, following after Bakugan: Gundalian Invaders. It contains a total of 46 episodes across two arcs; the first arc which contains 26 episodes debuted on February 13, 2011 in Canada and March 5, 2011 in the United States. The second arc debuted September 10, 2011 and contains 20 episodes.

Although a Japanese dub was recorded, Mechtanium Surge never aired in Japan and Korea, and Gundalian Invaders was instead followed by BakuTech! Bakugan in Japan. It wasn't until September 7, 2018 that the Japanese dub was made available via the Chinese streaming site Bilibili.[1]

Bakugan Interspace gets messy when Dan learns his battling directly threatens Earth. Drago's exposure to Code Eve has infused him with incredible power, causing him to unwittingly release Mechtogan Zenthon, a new, mysterious entity that wreaks havoc whenever Drago battles! While Dan attempts to regain control over Drago's new powers, an insidious enemy builds an army of "Chaos Bakugan" engineered for total world domination! Will Dan be able to get a hold of Drago's power before it's too late?

Bakugan City is off to a peaceful start now that humans have communed with the Bakugan from New Vestroia. This comes to an abrupt end, however, when four Mechtogan who have broken free from their Bakugan start terrorizing the place. Not only that, but some creep called Wiseman has appeared with ancient Bakugan called the Nonets. It's now up to the Battle Brawlers to stop Wiseman, the Nonets, and the Mechtogan's greatest weapon: Mechtavius Destroyer! 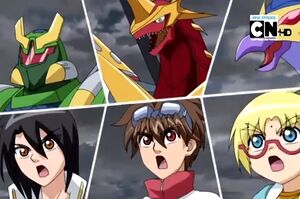 The main antagonists of Arc 1. 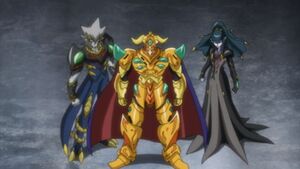 The main antagonists of Arc 2. 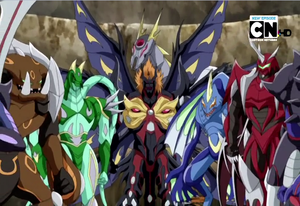 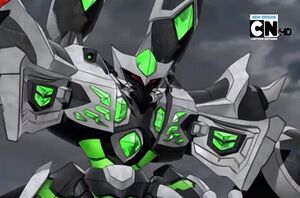 Team Anubias: Brawlers led by Anubias; notably, all of them use Ziperator as their chosen Bakugan.

The fourth season contains 46 episodes in total which divided into two story arcs. The first arc contains 26 episodes and aired in February 13th. The second Arc, which contains 20 episodes aired in September 10th, a month after end of the first arc.