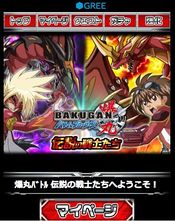 The game's story is a retelling of Bakugan Battle Brawlers: New Vestroia, and most of the game's graphics are taken straight from the anime.

Players could collect cards of Bakugan and characters from the anime. The storyline was progressed via chapters, and "battles" were conducted by having a Bakugan appear in front of you, which you tapped on to defeat. Defeating Bakugan costed stamina, which recovered over time.