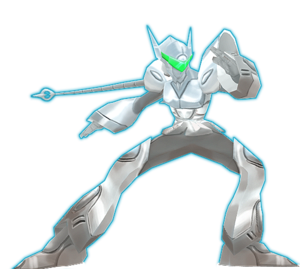 Clear, Non-Attribute (無属性, Mu Zokusei?) in Japan, are Bakugan have no Attribute symbol and have a clear body. Clear Bakugan come in Booster Packs and in triad sets. Although it is impossible to buy Special Attack/Super Assault Clear Bakugan, Bakugan Dimensions still had sprites for them.

At the start of a battle, Clear Bakugan take on the Attribute of your opponent's Bakugan. If both players have a clear Bakugan, they both get to pick which attribute they want for that battle.

Crystal Bakugan are Clear Bakugan with highlights of silver, and secondary/tertiary/other colors of some random Attribute. They are played same way as normal Clear Bakugan. Crystal Treatment was introduced in BakuCrystal set.

In Bakugan Dimensions, Clears count as only half of any attribute. Their stats on Bakugan Dimensions are higher and more well rounded than normal Bakugan. However, they are most useful when in Multi-Style due to the fact that there are no stops in between.