BakuMetallic is a Japan exclusive Special Treatment consisting of chrome-plated shiny metallic single-color BakuTech. They are usually given out as special prizes to online campaigns and official tournaments in Japan. 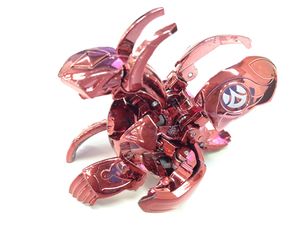 If treated Bakugan of more than one color exist, the treatment will be named with the respective color of the Bakugan.