This article is a guide on How to Play Bakugan Battle Planet: Toy Battling Game. This version of the game is very similar to the original Bakugan game excluding the use of Ability Cards.

The Toy Battling Game is a easy way to play the Bakugan game, players use three Bakugan and their Character Cards alongside 6 BakuCores and roll their Bakugan to see who has the highest B-Power. The first battler who gets all three of their Bakugan open wins the game. A Starter Pack is the best option for those who want to play the Toy Battling Game.

Halfway through Bakugan: Armored Alliance they introduced the Gate Battling Game, a simpler version of the toy battling game that uses Gate Cards instead of BakuCores.

Requirements to start the Game[edit]

The requirements to play the game.

The Each player must have the following in order to play the game:

A Bakugan Battle Planet Starter Pack contains everything you need to play the Toy Battling Game.

You can also use those pieces in the game:

Setting up the Game[edit] 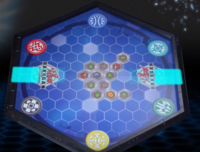 An example of a Hide Matrix, the tiles can be shaped differently as long one BakuCore touches another one.

Nanogan Cards are laid down next to the players, with corresponding Nanogan put on top of their cards. 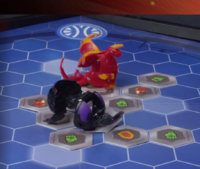 Once the Hide Matrix is set and the Bakugan balls are closed on top of the Character Cards, it is time to brawl! Players will take one of their three Bakugan and roll their Bakugan onto any BakuCore in the Hide Matrix.

Both players must roll at the same time, this must be done at least two Card lengths away from the Hide Matrix. There are a few scenarios that may happen when rolling:

There may be a rare occasion where a Bakugan picks up multiple BakuCores, should this occur, the player can use both the effects of the BakuCore in the battle. Additionally, if a Bakugan stands on a BakuCore but doesn't open, this still counts as a stand.

Once two Bakugan stand, the brawl begins. Players will flip the Bakugan's Character Card over to view the Bakugans stats. 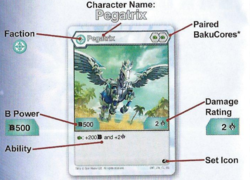 As shown in this image, you can see the Core version of Haos Pegatrix. It shows the Pegatrix is of the Haos Faction, it has a B-Power of 500, a Damage Rating of 2, and the Paired BakuCores are both

(Fist). This card also has an effect/ability that increases Pegatrix' B-Power by 200 and Damage Rating by 2 if it lands on a Fist BakuCore.

The other player also flips their Character Card to view the Bakugans stats. Compare the B-Power of the two Bakugan using the Character Cards, but the battle isn't finished yet.

The battle is not over yet, after the two Character Cards are revealed, the two players must flip over the BakuCores their Bakugan standed on to see who has the highest B-Power. It is possible for a Bakugan to land on two or more BakuCores, if this occurs then the Bakugan can use the effects of both the BakuCores.

As shown in this image, the Pyrus Dragonoid collected a

Ventus. The Bakugan has

200 on the Character Card, with the BakuCore, Pyrus Dragonoid's power level becomes

300 on its Character Card, it collected a

(Shield) BakuCore with an effect that lowers the B-Power by 300. Darkus Hydorous now has 0 B-Power.

Note: A Bakugan cannot have a negative B-Power or Damage Rating, if the Bakugan has a B-Power of 200 and the BakuCore it picked up lowers its

After the BakuCore effects are added, compare the two B-Powers of the Bakugan. Pyrus Dragonoid has 600 B-Power, Darkus Hydorous has 0 B-Power. Therefore, Pyrus Dragonoid wins the battle.

There may be occasions where both players have the same B-Power, should this occur, the winner is determined by the Bakugan with the higher Damage Rating. For example, Both Bakugan ended up with 700 B-Power after the calculations. Bakugan 1 has 6

, Bakugan 1 has the higher Damage Rating - Bakugan 1 wins the battle.

If both Bakugan somehow end up with the same B-Power and Damage Rating, the two players must re-roll and try to land on different BakuCores with a different effect so a winner can be determined.

During the battle, you can also play Geogan, Baku-Gear or Nanogan.
Baku-Gear can be played if your Bakugan grabbed BakuCore with Gear Reduction Cost symbol, and only with Bakugan they came with.
Geogan can be played during the battle, if you are about to lose, by folding your current Bakugan, and dropping Geogan from 2 cards height on the field - if it opens, you use it as you normally do your Bakugan. If it doesn't, you lose the battle.
Nanogan are played by flipping it's card. If your team has set cores on them corresponding one of Nanogan's effects, you can activate that effect and gain the bonuces. 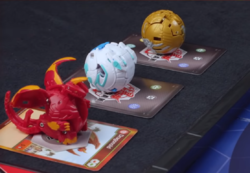 Pyrus Dragonoid won the round, so it stays open on the flipped Character Card. The winner must use the other two Bakugan now.

After the Bakugan wins the battle, place the winner Bakugan alongside the BakuCore it collected to your side on the Character Card (the card should be facing up). Since this Bakugan won, it cannot be used again and you must use your other two Bakugan. The person who lost the round can reuse the loser Bakugan, or they may try to use a different Bakugan.

The two players must then repeat these rules until one player has all their Bakugan open, methods of "opening" their Bakugan could be achieved by winning the B-Power calculations or being the only player who had their Bakugan stand in battle.

The first player to have all three of their Bakugan opened wins the whole brawl!

If you own a Fusion Bakugan and it picks up a BakuCore with a Fusion Symbol on the back flip over your Bakugan's character card to it's fused side and use those stats instead of the ones on the toy.

The Gate Battling Game plays the same as the old Toy Battling Game, the only difference is that you need 3 Gate Cards instead of 6 BakuCores.

How to play the Toy Battling Game
Retrieved from "https://bakugan.wiki/index.php?title=Toy_Battling_Game/How_to_Play&oldid=830435"
Categories: