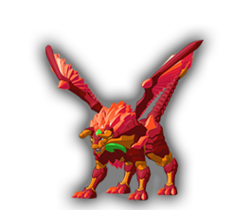 Geogan (ジオガンラ, Jiogan?) are a type of Bakugan figure introduced in Bakugan: Geogan Rising. They serve as the equivalent to the Bakugan Traps from the original series (much like how Baku-Gear are the equivalent to Battle Gear) in that they are Bakugan that take geometric shapes other than spheres when closed.

Geogan debuted in Bakugan: Geogan Rising, and are Bakugan-like creatures that have fused with crystals to form different geometric shapes.[1]

Not much is known about their past, it is only know that they lived together with the Bakugan in the ancient times of Vestroia. But, for unknown reasons, they had to go to their realm.

Later, after an unknown amount of time, a human girl called Crystal Blue somehow traveled to the Geogan Realm, where she gained the ability to communicate both with them and the Bakugan.

In the present day, they were awakened by experiments conducted by Gregorius Reed in his search for the ultimate Bakugan. They first emerged after Reed's experimentation resulted in the destruction of a Core Cell, allowing Geogan to be summoned by brawlers.

To play a Geogan, you must be able to pay its Geogan Card Energy requirement, as well as be able to Reroll your Bakugan. You then retract your Bakugan and drop the physical Geogan toy one card length onto the Hide Matrix, or game field. It then follows the same rules as a normal Bakugan roll: it acquires any BakuCores it picks up and any subsequent bonuses. Since Geogan are a subtype of Bakugan, that are Reroll-able, even though they technically do not roll.

In essence, Geogan function as single-turn Evolutions. They also have peg holes that can support Baku-Gear.