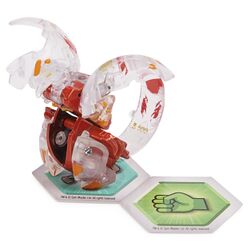 Platinum Bakugan are a Variant of Bakugan introduced in Bakugan: Evolutions. They are characterized by their diecast components, branded as "True Metal".

Platinum Bakugan are a style of Bakugan introduced in Bakugan: Evolutions. They use variations of molds for Core Bakugan but have a large part of their body made of metal in a similar style to GeoForge Dragonoid. Because of the way the metal parts affect the makeup of the Bakugan, certain parts of the mold may be changed for the sake of maintaining durability. There are also Platinum Geogan, similarly characterized by metal parts. However, care should be taken when playing Platinum Geogan, as the way they are dropped onto the field combined with the additional weight of the metal may damage play surfaces.

There are multiple Variants of Platinum Bakugan:

Note that these rules are not always adhered to, as Platinum Bakugan, notably from the Power Up series, can vary from the standard coloration patterns.

They also come in the Chase Variants, Diamond and Elemental.