Elemental Dragonoid, an example of an Elemental Bakugan

Elemental Bakugan, also known as Elemental-Rare, is a type of Chase Rarity of Bakugan in the Bakugan Reboot, introduced in Bakugan: Geogan Rising. They are Variant Bakugan that can rarely be found in stores. They are listed as "Ultra Rare" and were designed to be rarer than Diamond Bakugan.

The translucent and special paint design is similar to the 1/500 Ultra Rare Dragonoid and Dragonoid x Tretorous from Bakugan: Armored Alliance. 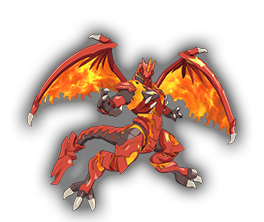 Dragonoid, one of Elemental Bakugan

Elemental Bakugan can be distinguished from normal Bakugan by their appearance: Elemental Bakugan have some parts of their body covered by patterns and markings unique to each Faction, and their anatomy emits elements at specific parts.

In "Evolutions Unleashed!", Elemental Bakugan first appear used by Academy staff and Athena Monde. Later in the same episode, Drago, as a result of absorbing an Elemental Storm, became an Elemental Bakugan, as well as did Trox, Howlkor, Pegatrix, Pharol and Hydorous after Dragonoid shared the elemental power with them.

Initially launched in third season of Reboot, they were presented as translucent Bakugan with special Faction-related printed pattern on them. They were the rarest type of regular release Bakugan, and came only in single packs. Each wave had one Ultra and one Core Elemental Bakugan, usually being printed in the primary Faction of that Bakugan, with the sole exception being Crustillion.

All Core Bakugan from this season had modified Character Cards with elemental printed patterns; this trait extended to Pyrus Dragonoid Ultra and Ventus Serpillious Ultra as well, but not to Darkus Demorc Ultra or Haos Fenneca Ultra.

In the fourth season, few changes were made to the Elemental Bakugan. They were renamed to "Elemental Rare", and were not rarest type of the Bakugan with the introduction of "Evo-Rare" Bakugan, which are even rarer than the Elemental Bakugan. Also, Elemental Bakugan now come in different variants from the Geogan Rising ones: Mythic Bakugan come as Translucent Flip Bakugan, while main line Core and Platinum Bakugan are Translucent with elemental patterns, as well as Platinum Bakugan using metal of their primary Faction color instead of the secondary color. In addition, Elemental Mythic Bakugan have altered stats when compared to their normal counterparts.

Bakugan: Evolutions also introduced Elemental Geogan. These figures do not have the elemental patterns of Core, Ultra and Platinum Bakugan, but do feature the gold markings and metallic plastic.

In the fifth season, Elemental Fusion Bakugan were introduced, and the elemental printed patterns on Character Cards were discontinued.