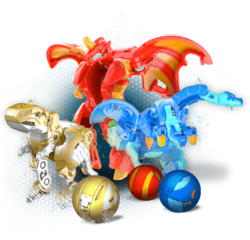 Bakugan Ultra is a special variant of Bakugan introduced in the Bakugan Battle Planet toyline. They are larger and more detailed Bakugan that resemble their Bakugan form in the anime.

Bakugan Ultra Bakugan are the same size as normal Bakugan from the Battle Planet toyline, but they are designed to resemble their Bakugan Form, similar to BakuMorphs. Most of the ball forms of Bakugan in the anime are their Ultra versions.

Unlike normal Bakugan, which simply open when they land on a BakuCore, Bakugan Ultra pick up the BakuCore as they roll over it, then leap open and flip over the BakuCore. As such, the magnets on Ultras are not on the base of the transformed ball, and are instead in other places such as in the head or the tail.

For gameplay purposes, the Core Bakugan and the Ultra equivalents are treated as separate characters. For example, players cannot use two core Pyrus Dragonoids in one deck, but they are permitted to use both a core Dragonoid and a Dragonoid Ultra because they have separate Character Cards.

In addition to these, Cyndeous Ultra was reprinted.