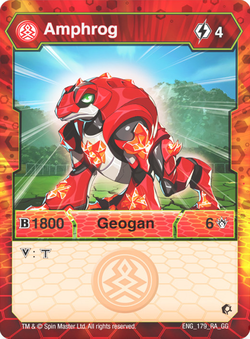 Pyrus Amphrog, a Geogan card that triggers a Team Attack on Victor.

Team Attack is a gameplay element and keyword in the Bakugan Reboot Trading Card Game that allows a player to attack their opponent with all three of their open Bakugan at once.

How to use a Team Attack[edit]

To conduct a team attack, two criteria must be met:

If a player meets both these criteria, they are able to initiate a Team Attack. During the Team Attack, the player combines the Damage Rating of their open Bakugan, including any attached BakuCores that add additional Damage. However, Tag-Word Abilities only apply to the Team Attack if Victor Bakugan, or the Bakugan that won the previous Power Phase, has the Ability.

After a Team Attack is completed, each Bakugan that the attacking player controls is retracted.

Certain cards have triggers which provide a Bonus when a Team Attack is triggered.