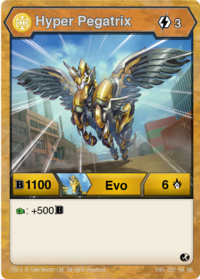 A Evo Card is a type of Ability Card in the Bakugan Battle Planet trading card game. Evo Cards are played from the hand and are played on top of their matching Character Card and remain in play for the rest of the game.

The stages of evolution are Base > Hyper > Titan > Maximus. You can evolve from the Base Bakugan such as Aquos Hydorous Ultra to Aquos Maximus Hydorous Ultra without having to evolve to Hyper and Titan as long as you have the two required cards. This was the only type of Ability Card that supported the Aurelus Faction until the release of Age of Aurelus.