Bakugan Battle Planet is the first season of the Bakugan reboot.

The season follows the adventures of Dan Kouzo and his best friends, the first kids on Earth to bond with the mysterious alien creatures known as the Bakugan. The storyline will revolve around friendship, battling, and competition. The series is available to stream on U.S and Canada Netflix. The series is also available to be watched for Canadians on YouTube.

Bakugan: Armored Alliance, a continuation of the series, began airing on February 16th, 2020.[2] 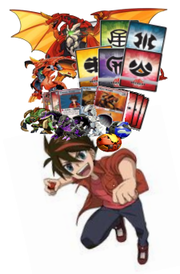 During Spin Master's Q4 2017 financial results conference call, more details about the reboot were discussed. The episodes will be two eleven-minute programs rather than the traditional 22-minute format. The possibility of a movie is also in discussion. For the toy line, Spin Master mentioned "advanced innovation" being brought to the toys and confirmed that it would be a global release.[6] A second trademark was filed on March 29, 2018, depicting a proper logo.[7]

In its Q2 2018 financial results conference call, Spin Master set a tentative release date for the show and its toy line for Spring 2019.[2] In October, the show was pushed forward to a December 2018 release.[1] A few days later, Battle Planet was confirmed to consist of 100 11-minute episodes which also can be marketed as 50 22-minute episodes.[8] On October 15, some voice actors for the series and character names were revealed via Twitter; Dan Kouzo would be voiced by Jonah Wineburg, Shun by Ticoon Kim, and Wynton Styles by Deven Mack.[9][10]

In early November, new toys were first listed on Amazon, showing off some of the new Bakugan and the new attribute symbols.

The Bakugan.com official site, leading up to December 1st, had a sign-up form for email newsletters regarding Battle Planet information, as well as a countdown to December 1st. After December 1st, no new information was revealed, but a new countdown timer was set to December 17th, promising that "all will be revealed." There were two other notable changes: the sign-up form changed, from simply prompting "Enter Your Birthday" then asking for an email, to "Sign up for our Baku-Blast! Enter your age to begin," as well as a new "Incoming Transmission" message at the top of screen which, upon clicking, would play a short clip of an unknown Pyrus Dragonoid blasting fire at the screen before returning to the main page.

Bakugan.com finally launched on December 17th, the website includes sections about the products, characters, and Bakugan.

The Bakugan Battle Planet anime features fifty-two, eleven minute episodes, as opposed to the former twenty-two minute episodes its predecessor used. In the United States, the series began on December 23, 2018 with Origin of the Species Part 1, and aired its final episode, United We Stand, on January 19, 2020.

The cast of Bakugan Battle Planet featured a mixture of new characters and re-imagined characters from the previous iteration of the franchise. The new protagonists of the series are the "Awesome Ones", a group of child content creators who mysteriously encounter first encounter creatures known as Bakugan ten years after an event called the Great Collision. However, they are not the only ones to encounter this race of alien beings. Several villainous groups using Bakugan also emerge, such as the Exit Team and AAAnimus.

Like the original series, Bakugan Battle Planet will have an integrated toy line featuring physical toys, marble-like balls that transform into collectible characters once rolled over a magnetic object, this time a hexagonal tile called a BakuCore. Along with the physical game, a mobile app (Bakugan Fan Hub) and online integration also have been launched.

The product line released in North America and other select markets on January 1, 2019, with a full global roll-out in the second quarter.

There are two type of Bakugan, Core Bakugan ($7 USD) are the basic Bakugan that are simple to close. Bakugan Ultra ($10 USD) Bakugan have more complex designs and have the ability to jump and flip the BakuCore.

The BakuCore has replaced Gate Cards, they are metal, hexagonal tiles that can increase/decrease B-Power (renamed G-Power), increase Damage, and other effects. Ability Cards also return but players can use up to 40 now rather than 3. Each Bakugan now comes with a Character Card that lists their stats, name, and Faction.

Some products with multiple Bakugan include Starter Packs, Battle Packs, and the Starter Set. Other accessories include the Baku-Storage and Bakugan Battle Arena.

Ability Cards can be collected from Booster Packs and Card Collections. A Card list can be found here.

Due to Sega Toys owning the designs to the Legacy Bakugan, SpinMaster cannot reproduce old Bakugan such as Neo Dragonoid and Alpha Hydranoid. The same factor is with the original Attribute symbols, which have been redesigned, Attributes are now called Factions. The elemental symbols are also no longer printed on the Bakugan.

The following changes were made between the English and Japanese versions of the anime: