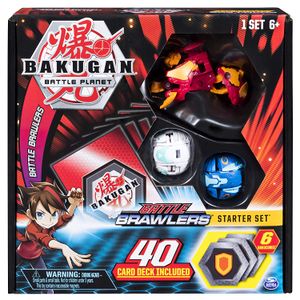 The Bakugan Battle Planet Battle Brawlers Starter Set is a starter set that is part of the first card set which contains 40 Ability Cards as well as 1 Bakugan Ultra Bakugan and 2 regular Bakugan.

This set allows players to play the trading-card aspect of the game. It comes with 1 Bakugan Ultra Bakugan, 2 Core Bakugan, 6 BakuCores, 3 Character Cards, and 40 Ability Cards. It is priced at $29.99 (USD).

The cards are the same in every package, so the 40 card deck inside is the same for every Pyrus Hydorous Ultra Starter Set for example. The cards are great for players looking to start playing the game, more cards can be received from Booster Packs.