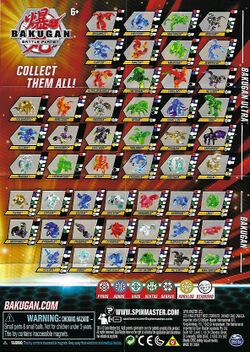 A checklist for Bakugan available from Wave 1 to 5 and beyond, some Bakugan in certain Factions may not be on there, and ones may be listed in factions they are not available in.
If you are looking for the Bakugan Battle Planet card list for the first card expansion, see Battle Brawlers (Card Set)

This page is a listing for all known Bakugan Battle Planet waves and what products were released in those waves (or "mix")[1]. This page includes all known products, including Single Packs, Starter Packs, and more. Some products may have a placeholder image due to lacking a high quality image that can be used.

Note: This list is only for releases from Spin Master. For the Asia release (Takara Tomy), see: List of Bakugan Battle Planet Waves (Takara Tomy). 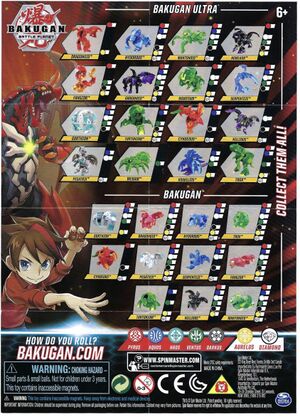 The Starter Set is a set that allows Brawlers to play the trading-card aspect of the game. It comes with 1 Bakugan Ultra Bakugan, 2 Core Bakugan, 6 BakuCores, 3 Character Cards, and 40 Ability Cards. It is priced at $29.99 (USD).

Single Packs are $7 USD, Diamond Bakugan are rare depending on your store. More Bakugan are planned to be shipped to the stores and may arrive in the middle of January or late January.

In May 2019, the second Card Expansion of Battle Planet (Bakugan Resurgence) was released. New Bakugan such as Webam, Nobilious, Hydranoid, Lupitheon, Phaedrus, and Cubbo was introduced. There were also new variants of Bakugan that were previous introduced in the Battle Brawlers Card set like Pyrus Trox Ultra and Aurelus Dragonoid Ultra.

A list of all Battle Planet Cards can be found on this page.

Note that, in cases that do not contain Diamond Pegatrix Ultra, the Pyrus Dragonoid Ultra single from Wave 3 was re-printed.

The Brawler 2-Packs were exclusive to Mexico, Australia, New Zealand and Canada.

Note that, in cases that do not contain Diamond Hydranoid Ultra, the Haos Pegatrix Ultra single from Wave 4 was re-printed.

The third card set is called Age of Aurelus, new Bakugan that are a part of this set will have the AA at the end of the serial on their Character Cards.

Note: Starter Packs were not released at the same time as Single Packs 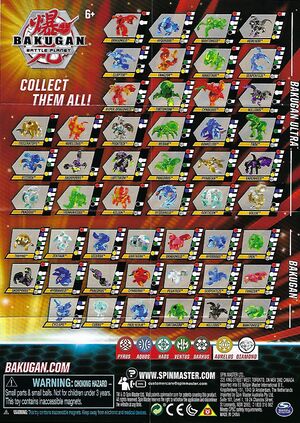 The Age of Aurelus checklist

The seventh mix was released in mid November-December 2019, these are the final releases of Bakugan Battle Planet.

Certain Starter Packs are known to contain the wrong card, contact Spin Master Customer Care if you received the wrong Character Card in your Starter Pack.

The second Starter Pack mix of Age of Aurelus.