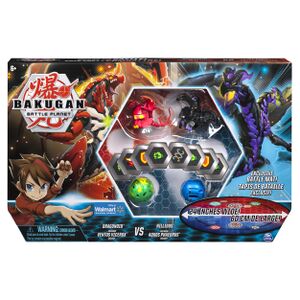 Bring your Bakugan battling to life with the Bakugan Battle Bundle! You can unbox and battle, straight out of the package! Inside this bundle, you’ll find four fierce Bakugan (with two exclusives you can’t find anywhere else!), eight powerful BakuCores, four character cards, four ability cards and an exclusive battle mat for epic battles. Lay out the mat and roll your Bakugan over the included BakuCores for pop-open Baku-action! Armed with your new Bakugan, you can battle against your friends to see who will become Battle Planet’s Ultimate Bakugan Master! Build your own epic Bakugan army with the Bakugan Battle Bundle and roll into action! 4 TRANSFORMING BAKUGAN, INCLUDING 2 EXCLUSIVES: The Bakugan Battle Bundle features 4 fierce Bakugan, including 2 exclusive figures you won’t find anywhere else! Prepare for battle with 8 BakuCores, 4 ability cards, and 4 character cards (all included)! EXCLUSIVE BATTLE MAT: With an exclusive battle mat included, you’ll be ready to unbox and face off against your friends right out of the package! Lay out the mat, roll your Bakugan over the BakuCores to unleash their power, and pop open into Baku-action! COLLECT, TRADE, BATTLE: Grow your Bakugan collection with the Bakugan, character cards, BakuCores and ability cards included in this bundle. Trade with friends, or head straight into Baku-brawling action! The Bakugan Battle Bundle is a great gift for kids aged 6 and up. Face off against your friends and become Battle Planet’s Ultimate Bakugan Master! WARNING: CHOKING HAZARD - Small parts. Not for children under 3 years.