Bakugan: Gundalian Invaders (Japanese version Bakugan Battle Brawlers: Gundalian Invaders (爆丸バトルブローラーズ: ガンダリアンインベーダーズ, Bakugan Batoru Burōrāzu: Gandarian Inbēdāzu?)) is the third season of the anime series, Bakugan Battle Brawlers. It contains a total of 39 episodes and made its debut on May 23, 2010 in Canada and on May 29, 2010 in the United States. The original Japanese version began airing on April 3, 2011 on TV Tokyo at 9:00 AM JST.

According to Sega Toys president Isao Kokubun, the third season tied into an online game project.[1] It is followed by Bakugan: Mechtanium Surge.

Dan Kuso, Marucho Marukura, and Shun Kazami get caught up in a war between two different alien factions in another universe, teaming up with three new brawlers: the Neathian, Fabia, the new human, Jake, and the undercover Gundalian, Ren, in order to stop the evil Gundalian Protectors, the Twelve Orders, from destroying Neathia, and possibly Earth. They meet these extraterrestrials when they enter through the virtual reality Bakugan Interspace. At first, the Brawlers are deceived into thinking that Neathia had started the war against Gundalia but, as the story progresses, the Brawlers realize that its actually the other way around. The stakes are high! Will the Battle Brawlers defeat the Twelve Orders, saving the Bakugan once more? Or will they lose this time? 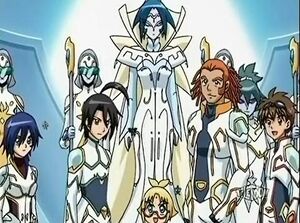 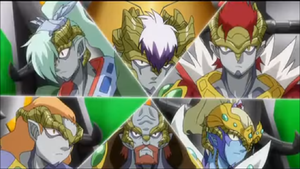 Twelve Orders: The strongest Gundalian brawlers, led by their emperor, Barodius. Six of them are the strongest brawlers of their element, while the other six (also referred to as the "Gundalian Agents") are the most promising of the younger brawlers. 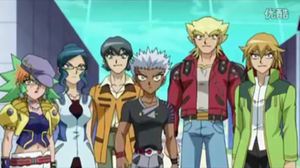 Logo of the game

The MMORPG Bakugan Dimensions was closely tied to Gundalian Invaders, launching a month after the anime began airing and having tie-ins to the physical toy line that released with it. The game would last a bit over a year before being shut down on June 30, 2011, around the end of the first arc of Mechtanium Surge.