In the anime, he makes his first cameo in the finale of Bakugan Battle Brawlers: New Vestroia in the video Clay Fermin receives of the Neathian-Gundalian War. In Bakugan: Gundalian Invaders, he serves as the Guardian Bakugan of Barodius, the cruel emperor of Gundalia, and was complicit with his master's behavior. After losing to Dan Kuso and Drago at the end of the season, he and Barodius attempt to claim the Sacred Orb's power for themselves anyways, causing them to be imprisoned in a separate dimension. The two return in the next season, mutated into Razenoid and Mag Mel, respectively.

Gundalia's strongest Bakugan and the partner of Emperor Barodius. He is from the same lineage as Drago, and has inherited the DNA of the biological makeup of one of the two original Bakugan. He projects a dark energy blast from his mouth to devastate his opponents and only Emperor Barodius can bring out the best of his abilities.

Dharak is from the same lineage as Drago, so he has inherited the DNA of the most powerful biological makeup of the Ancient Bakugan. He can blast energy from his mouth to devastate his opponents.[1] 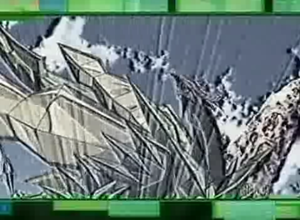 In Final Fury, he was shown on a video that Professor Clay received from an unknown source, which was later revealed to be Fabia Sheen. He was at war alongside Lumagrowl, Strikeflier, Sabator, Lythirus, and Krakix. He also combined with his Battle Gear (AirKor) and defeated a large number of Neathian Bakugan. 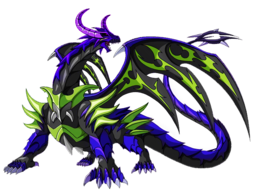 Dharak makes his debut in a vision of Dan's, along Barodius and the rest of the Twelve Orders' Bakugan.[2]

Dharak appears briefly talking to Emperor Barodius,[3] and later comments that the human brawlers stolen from Earth were efficient.[4]

He appears once again talking about Drago possibly being tough for Linehalt to defeat.[5]

He battles on Neathia with the rest of the Twelve Orders and uses Exokor to become Dharak Colossus for the first time. He uses his armor to destroy the Second Security Shield. He also met Drago for the first time, calling him a "Worthless lizard." They end up battling, but when they both get close to each other, a bright light (Code Eve) appeared, and all Gundalians were sent back to Gundalia.[6]

He battled against Sabator and his Battle Gear Chompixx. He lost in the first round due to Sabator using a Level 3 Class Battle Gear Ability Card but in the second round he defeated Sabator, who managed to survive due to the Sacred Orb transferring him between dimensions.[7]

He attacks Sid because he escaped from Kazarina's Lab, which causes Sid to fall to his death trying to save Ren. When Dan tries to convince Ren to switch sides, he tells Dan that his efforts to turn Ren are useless, and to save his insults for the battlefield.[8]

He merges with his upgraded Colossus Armor to permanently destroy the restored Second Shield and ends up facing Drago again. He easily defeats him and punctures a hole in the Second Shield. But before he can continue Ren switches sides and Linehalt attacks him.[9] 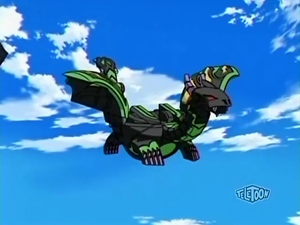 He detaches from his Colossus parts and then attached to AirKor to battle Ren and Linehalt. He won the first round but in the second round Linehalt unleashed his Forbidden Power, causing Dragonoid Colossus to appear and stop the battle.[10]

It was revealed that he and Drago were direct descendants from the original Dharaknoid and Dragonoid.[11]

He appeared talking to Emperor Barodius and Kazarina about Drago.[13] 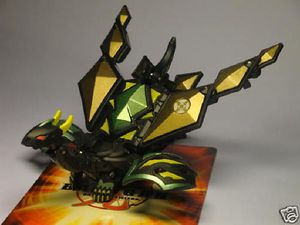 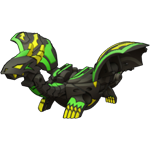 Like Helix Dragonoid, Lumagrowl, Avior, Strikeflier, and Phosphos, Dharak is Bakugan Battle Gear compatible. With the metal cylinder inside Dharak's back, Battle Gear can be activated when they combine. In order to do this, you pull down its wings and tail.

The Pyrus version comes in four variations, with 770 Gs in Crimson and Pearl, 660 Gs and 700 Gs in the BakuTriad, one that comes with the BakuClip and one that comes in a Brawler Game Pack.

The Subterra version comes in two variations, with 620 Gs in BakuTriad and 720 Gs in Game Pack.

The Haos version comes in four variations, with 640 Gs in BakuTriad, 660 Gs with a BakuClip, 690 Gs in the Target-exclusive "Evil Twin" pack and 750 Gs in BakuGranite.

The Aquos version comes with 720 Gs in BakuTriad and BakuBoost and in BakuTin he comes in 700 Gs. It is also available with the Gundalian Invaders BakuClip.

The Ventus version comes in three variations, with 700 Gs in BakuBoost and 660 in Brawlers Game Pack and 700 Gs in BakuTriad. A BakuBlue is 870 Gs for Aquos only at Walmart.

His Translucent Darkus version has 720 Gs.

It is one of the few Bakugan who have also been released in BakuMorph.

Dharak was also going to be remade as a Baku Sky Raider with a small adjustment to the feet so it can jump, but it was never released.