Coredem is partners with Jake of the Battle Brawlers. His defense and attack mode are grounded and solid. He punches the ground to destroy a Gate Card. The blue lens on Coredem's chest lights up the lines on his body, which runs through his arms to the fists powering them up for massive energy punches that hit the ground and makes rocks float up in the air, then punches them again and uses them as projectiles to smash the enemy. A dimensional hole in his palms absorbs all energy from an attack. His Battle Gear is Rock Hammer. The helmet-like structure on his head closes up during battle.

Coredem first appears in episode 43 along with Aranaut, Hawktor and Akwimos when they somehow appear in Bakugan Interspace as Phantom Data.

Coredem and Hawktor battled Dan in episode 45 with Spectra as their temporary owner to test Dan for which Battle Gear Drago would be compatible with. Drago and Dan won and both Hawktor and Coredem were beaten. He also used a Battle Gear called Rock Hammer. 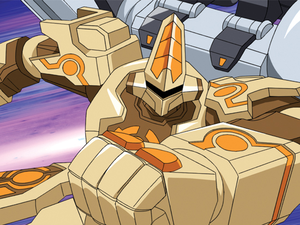 It is revealed during episode 1 that Coredem and Aranaut were still in Marucho's possession until Dan introduces him to Jake, a beginner brawler. As a gift Marucho offers him either Aranaut or Coredem and Jake chooses Coredem over Aranaut as his Guardian Bakugan. However, as Coredem was a Cloned Bakugan, he could not talk, something that disappointed Jake. In addition to Coredem, Jake also received the Battle Gear Rock Hammer. At first, Jake was a weak brawler, but then Julie Makimoto helped him out.

In episode 4, he appeared in Marucho's flashback. Later, he fought Avior twice. It lost the first battle, but won the second one thanks to Jake's strategies and Rock Hammer.

In episode 9, Dan, Jake, Drago and Coredem battled two twins under hypnosis and Coredem called Drago, "brother", they won, so they snapped the kids out of it, taking their Ziperator and Ramdol in the process.

In episode 14, he brawled against Sabator. He and Sabator were evenly matched.

In episode 15, he teamed up with Akwimos and battled Strikeflier and Avior. They were getting hammered until Akwimos used an ability, which froze them both inside of ice crystals, to make the battle end without an outcome.

In episode 18, he and Aranaut battled and defeated Linehalt and Plitheon, despite losing in the 1st round.

He appeared again in episode 24 and 25 battling Krakix and Vicer with Rock Hammer but still lost in episode 25.

In episode 27, he battled Lumagrowl which used Barias Gear and he used Rock Hammer. He still lost both rounds even when he gave it his all.

In episode 28, he was brainwashed by Kazarina and later on he battled against Lumino Dragonoid under the hypnosis of Kazarina. Under her hypnosis, he became more animalistic and couldn't even speak, just making grunts and noises. He lost the first round but in the second round he was winning thanks to the Advanced Fusion Ability that Kazarina gave Jake until Hawktor came in and helped Drago beat him.

In episode 33, he battled Akwimos, but in the end, it was a tie.

In episode 35, he and Jake broke free of Kazarina's hypnosis and he smashed his way through the tube where Drago was being held.

In Destiny Revealed, he was revived by Linehalt's "Forbidden Power". He is later saying goodbye to Jake while trying to get Jake to stop crying so hard. 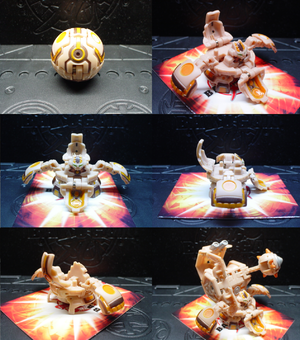 Coredem is first released in the BakuSpin packs, in Subterra, Aquos and Pyrus, all of the 3 are translucent. Coredem is Bakugan Battle Gear compatible.