—Lumagrowl to Drago, Battle For the Second Shield

Lumagrowl, Wolfang (ウルファング, Urufangu?) in the Japanese version, is a wolf/fox-like Bakugan with six tails. He was partnered with Kazarina and together they made up the Haos team for the Twelve Orders.

He maintains a large rivalry with Aranaut, which comes to a head when they battle on Gundalia, but he does show a sense of honor when he surrenders after Kazarina's death.

Partners with Kanzina of the Twelve Orders. Hardly ever shows emotion making it difficult to tell what it's thinking. The swords, which equip Lumagrowl's tail, attack all round from close to intermediate range making it a lethal foe. Spreading out the tails in a special way unleashes a strong lightning bolt immobilizing opponents. Creates a cage around the body with the tail, which illuminates and blocks the opponent's attack.

Lumagrowl hardly ever shows emotion, making it difficult to tell what he is thinking. However, his opponents should always be wary, for he is a lethal opponent at any range.[1] 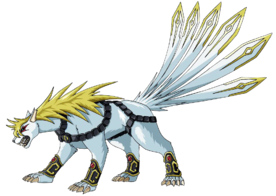 He is seen in Dan's illusion alongside each of the other Twelve Orders' Bakugan.[3]

He battles Aranaut during the Twelve Orders' attack on the second shield. He appears to be performing competently until the Sacred Orb sends all the Gundalians back to Gundalia.[5]

He battles Lumino Dragonoid alongside Phosphos. He wins the first round but loses in the second round due to Dan and Hawktor appearing to aid Lumino Dragonoid. Shun and Dan quickly switch their Bakugan back and Lumagrowl is almost effortlessly defeated by Drago. Later, as Lena attempts to use Phosphos to ambush Kazarina for attempting to eliminate her, Lumagrowl appears to defend his mistress by intercepting Phosphos's attack and returning him to ball form.[6]

He battles Aranaut and Hawktor, making use of Barias Gear in its first on-screen appearance. The battle continues into the subsequent episode.[8]

He defeats Aranaut but is immediately beaten by Hawktor in retaliation.[9]

He is seen in a flashback. Here he is revealed as the one responsible for Jin's death and Aranaut's capture.[10]

Lumagrowl battles Coredem, utilizing his time-warping abilities for the first time on screen.[11]

He battles Aranaut and Sabator alongside Lythirus. During the second round, as he and Lythirus begin to lose momentum against their opponents, they are joined by Phosphos, Contestir, and Plitheon, who tilt the odds back in their favor. He later retreats alongside all of his teammates, barring Stoica and Lythirus, who use an ability called Death End Merman to submerge the battlefield and drown their adversaries.[12]

In , Lumagrowl is shown sleeping in the background. He later attacks Shun and Hawktor when he suspects their presence as trespassers.[13]

He briefly brawls against Aranaut. After Blitz Dragonoid and Coredem join the battle, Lumagrowl flees before later ambushing them with a Level 2 ability from his Barias Gear. He later confronts Dragonoid Colossus alongside Lythirus, Strikeflier and Krakix.[15]

He continues his endgame with Aranaut. When Kazarina activates Barias Gear Lightning Lumagrowl defies her by focusing his attack on her back-up Mobile Assaults, prompting his brawler to leave him to battle alone. He quickly gains an upper hand, appearing to be close to victory until he discovers Kazarina's death. Distracted by the revelation, he is struck down by a powerful blow from Aranaut and subsequently surrenders. Lumagrowl then walks off into the shadows with Kazarina's body, mourning the loss of his partner.[17]