Blitz Dragonoid, Flash Dragonoid (フラッシュ・ドラゴノイド, Furasshu Doragonoido?) in the Japanese version, is a Bakugan and the evolved form of Lumino Dragonoid. He is Dan's Guardian Bakugan before he evolved into Titanium Dragonoid. His official Battle Gear is Axator Gear.

Blitz Dragonoid fires out laser beams from his top horn to deactivate his enemy's special abilities. His wings wrap around his body to deflect fireballs. Being one of the strongest Bakugan, he knocks out the opposition by wielding his strong forked tail. When it's time for battle, his battle cry is heard from miles away.

He battled Dharak Colossus first and after defeating Dharak's extra armor, went for Dharak himself. Even though Dharak used AirKor to take out Jakalier and Axator Gear, Dragonoid Colossus gave Dan and Drago an Ability Card called Spire Dragon. Drago then used it to defeat Dharak. However, he and Dan are put in jail by a hypnotized Jake.[3] 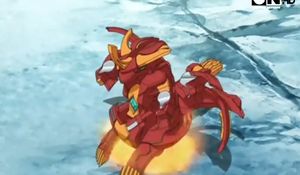 He appeared in Kazarina's Lab in a tube unable to move or to do anything. Also Kazarina was examining Blitz Dragonoid's DNA Code and said to Emperor Barodius it is nearly like Dharak's DNA Code.[5]

He battled Strikeflier and his Battle Gear (Battle Turbine) and there was no outcome. He is later very surprised that Phantom Dharak defeated all the Castle Knights in one attack.[9]

He and Dan listened to the Code Eve about the Bakugan's origin. It was also shown that Drago created Vestroia and Dharak created Neathia and Gundalia due to their power being to incredible so it split the dimensions. Also it is revealed that he and Dharak were destined to battle and Dan and Barodius was destined to battle and to be their partners. He then battles Phantom Dharak in a battle and despite losing the first round he ends up winning the battle due to him winning in the second and third round. Later Dharak and Barodius couldn't except their defeat and Phantom Dharak fly to The Sacred Orb only to be overwhelmed by its power and disappear in a burst of light. Code Eve then grants her power to him and it forced him to evolve into Titanium Dragonoid.[11]

He reappeared in flashbacks in Re-connection and End of the Line. 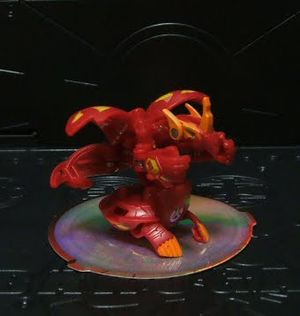 It is part of the BakuDouble Strike series. The button on its back must be pressed in order to reveal the G Power, an extra G-power can be revealed on the inside of his upper right wing. The Pyrus version has 700+50 Gs and 890+10 Gs. The Subterra version has 800 + 50 Gs. The Ventus version has 680 Gs.