Bakugan: Armored Alliance is the next season of the Bakugan reboot. Notable introductions include Baku-Gear, which are similar to BakuNano and Battle Gear from the original series. The Gate Trainer is also introduced, which functions like a Gate Card but appears to be cosmetic, but it helps players to learn how to roll their Bakugan.

In addition, the packaging style has changed to a gray color, BakuCores have been redesigned, and Bakugan now have their respective Faction symbol printed on them. 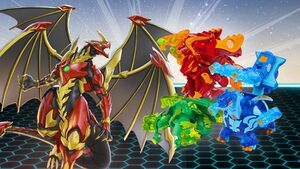 The Bakugan show continues with a second season with a total of 50x22min (104x11min) episodes; and it began airing on Feburary 16th 2020 on Teletoon Canada. The show also became available Netflix on October 13th, 2020.

A Japanese release of the show aired on April 3rd, 2021 on Youtube.

After saving two planets at once, The Awesome Brawlers are ready to rest... but evil forces have other plans! Thieves, criminals, and frightening monsters threaten the fate of humans and Bakugan alike, so our heroes must once again fight for the fate of two worlds — and the mysteries of the elusive Aurelus Bakugan, Pharol, and his partner Brawler, Ajit, will be unraveled as they do!