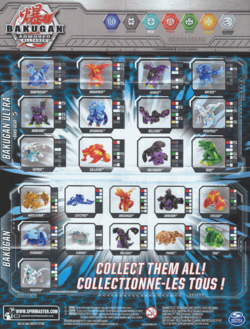 A collection sheet of some Bakugan that are in this season, mainly Bakugan included within the early mixes.

This page is a listing for all known Bakugan: Armored Alliance releases, or waves/mix. This page includes all known products, including Single/Solo Packs, Starter Packs, Bakugan Ultra + Baku-Gear, and Baku-Gear Pack (4-Pack). Some products may have a placeholder image due to lacking a high quality image at the moment.

Note: Not all products are released simultaneously, the Starter Packs and 1-Packs have a different release schedule.

To note: the original Armored Elite booster pack release was delayed, so they are being released later than other respective products.

Products posted here rely on some amount of guesswork, as they have been seen in packaging but not on store shelves. The position of products in Wave 3 and beyond may change as more information is known.