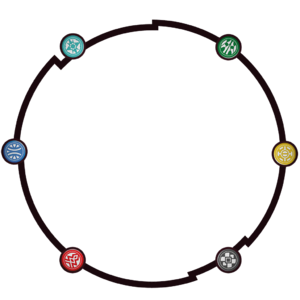 All Attributes return from the Battle Brawlers series except for Subterra (Ventus has taken the Earth aspect). The reason for Subterra being removed in the reboot series is because the Attribute was deemed "unpopular" by Spin Master. A new Faction (Attribute) known as Aurelus has been introduced into the game and has taken the spot of Subterra.

In Bakugan: Evolutions all Factions had their color scheme changed. In addition all Bakugan now have special printed designs on them depending on their Faction.

The colors of all Factions were changed again in Bakugan: Legends and instead of each Faction having different printed designs they now all have the same printed designs.

Colors in italics were introduced to the pallet during Geogan Rising

Battle Planet introduced a special variant of Bakugan called Diamond, which is not considered a Faction but functions as more of an Evo type.