An example of the underside of a Battle Planet BakuCore. In this case, if a Bakugan picks up this Core it receives +150 B-Power and +50 Damage

A BakuCore is a metal, hexagonal shaped tile that empowers Bakugan and allow them to transform from closed to open ball form in the Bakugan Battle Planet game. It is the replacement for the metal Gate Cards from the Legacy Series. BakuCores are only to be used with Battle Planet Bakugan (which are 36mm sized) and it is possible to pick up two BakuCores at once. Additionally, you are allowed to mark the underside of a BakuCore with markings/stickers as long as the text isn't covered.

In the gameplay, players must use six BakuCores (two for each Bakugan) and the symbols on the BakuCores must match the BakuCore symbols with those on the player's Character Cards.

BakuCores have two sides; the Front side contains the effect, effects can raise or lower the Bakugan's B-Power for one or more Faction. It can also add Damage, ShadowStrike, etc.

The Back side of BakuCores contain their types, which are:

. A Character Card could have an ability that says "

", which means as long as this Bakugan is holding a

BakuCores exist in the Bakugan Reboot anime as lit up hexagonal tiles on the Hide Matrix. Brawlers can grab and throw these tiles onto their Bakugan in order to boost their B-Power. The tiles are colored to correspond to the Faction they boost. 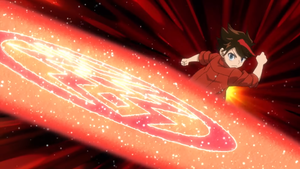 Armored Alliance introduces BakuCores that can add Baku-Gear to the Brawler's Bakugan. These BakuCores have their Faction symbol in addition to the Faction-based coloration. The latter half of the season also introduce Fusion Cores, which allowed a pair of Bakugan to fuse when they are rolled out onto them. There where also BakuCores that allowed certain Bakugan to Evolve.

Geogan Rising introduced a fourth kind of BakuCore, the Geogan Cores (or GeoCores for short), which are similar to the Baku-Gear Cores but with different color and had the ability to summon Geogan to the battlefield. The Geogan replaces the Bakugan that the Core is applied to, and once their purpose is fulfilled will return the Bakugan they replaced.