Bakugan Battle Brawlers (爆丸バトルブローラーズ, Bakugan Batoru Burōrāzu?) is a Japanese-Canadian action-adventure anime television series produced by TMS Entertainment and Japan Vistec under the direction of Mitsuo Hashimoto. The story centers on the lives of creatures called Bakugan, and the Battle Brawlers who possess them. It is the first season of the Battle Brawlers series.

Though initially a failure in Japan, the series became popular in the Canada and the US, prompting the creation of three subsequent seasons, all of which aired in the west prior to its release in its home country.

Dan Kuso's life changed one day when random cards fell out of the sky. Children all around the world invented a game called Bakugan out of these cards and the strange toys that turned into creatures. Together with his friends Runo Misaki, Marucho Marukura, Julie Makimoto, Shun Kazami, and Alice Gehabich, they formed the Bakugan Battle Brawlers.

Unbeknownst to them, they would soon be dragged into a fight for the fate of Vestroia—the Bakugan's home dimension—against Naga, Masquerade, and the Doom Beings that seek to take over the world with the power of the Perfect Core. 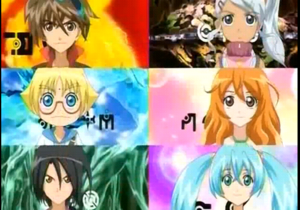 The Battle Brawlers in the intro 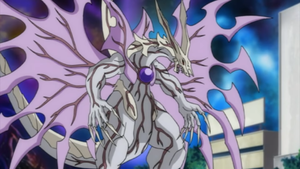 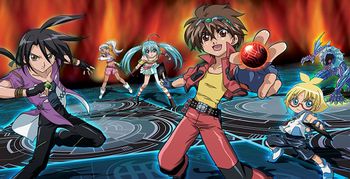 The fifty-two episode anime television series was produced by TMS Entertainment and Japan Vistec under the direction of Mitsuo Hashimoto in 2007. Bakugan Battle Brawlers made its debut in Japan on TV Tokyo on April 5, 2007[1], and was rebroadcast six days later on BS Japan. Nelvana Enterprises produced the English language version and premiered the series on the Canadian network Teletoon on July 2007 and then on Cartoon Network on February 24, 2008.

Several Original English Language (OEL) books were published in collaboration with Scholastic Books and Del Rey. Most were simply adaptions based on the anime, though one OEL manga, Bakugan: The Evo Tournament, has an original plot set in the middle of the series.

Two video games were created based on the first season. 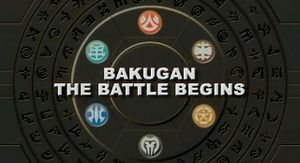 The symbols around the attribute signs are actually stylized Japanese characters

The following changes were made between the Japanese and English versions: