Hal-G was a major antagonist in the first installment of the anime series Bakugan Battle Brawlers. He was transformed from Michael Gehabich, Alice Gehabich's grandfather, when one of his experiments went wrong and Silent Core Energy possessed him.

While working on a dimensional transporter, he accidentally crossed to Vestroia, where he encountered Naga and inadvertently caused the beginning of Vestroia's collapse. His Guardian Bakugan is Naga. Upon his return from Vestroia he found that the creatures called Bakugan had come to Earth and that the children of the world invented the game Bakugan. 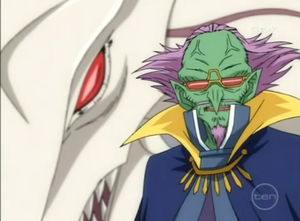 After that, he uses his transporter to send Naga and his minions to Earth to take the Infinity Core from Wavern, since all of the Battle Brawlers were stuck in Vestroia.

After Alice, Klaus von Hertzon and Christopher defeated Rabeeder, he tricked Alice into thinking that he was her grandfather trying to fight off Hal-G's control. Alice then took him to Wardington Palace to see Wavern, thinking she could help him. However once he got close enough, he sent out Naga to destroy Wavern. After Chan Lee and Shun Kazami showed up, he battled them and won with no trouble. After Wavern sacrificed herself and the Infinity Core was in Drago, he battled Dan Kuso for it. After seeing both of their Bakugan evenly matched, he brought out the Fifth Paladin and backed Drago in a corner. However, the rest of the Battle Brawlers' Bakugan defeated the 5th Paladin, while Dan, Drago and the rest of their friends defeated Naga and Hal-G.