Chan Lee (チャン・リー, Chan Rī?) is a supporting character in Bakugan Battle Brawlers. Originally the third-highest ranked brawler in the world, she is a Pyrus brawler and her Guardian Bakugan is Pyrus Fourtress. Because of Masquerade's plan, she is among the top brawlers who are brainwashed into becoming Naga's servants. After being freed from his control, she aids the Battle Brawlers in their quest to stop him.

She makes a brief return in Bakugan Battle Brawlers: New Vestroia to assist Alice Gehabich when Shadow Prove attacks, having been sent by Klaus von Hertzon to keep an eye on her.

Chan Lee has medium-length black hair, which is tied back in a ponytail. She has brown eyes and often wears eyeshadow. Both of her outfits are oriental-themed, her first outfit resembling the Vietnamese ao dai and the second reflecting a more modern Chinese dress. Both outfits have a traditional red-and-gold theme.

Chan Lee has been shown to be a show-off, similar to Dan. She is very proud of her ranking and does not hesitate to show it to the Brawlers. Her biggest problem is that she is overconfident and thinks she can beat anyone, even Masquerade. Because of her high ranking, she believes that no one can beat her. When Dan surprises her with a powerful counter that she can't beat, she says in a rather arrogant and egotistical tone "No, you can't beat ME." This overconfidence leads to her under-estimating her opponent, which often leads to her loss. She's also shown to be naive, believing that she can easily take Masquerade.

Aside from her overconfidence, she also looks out for her friends and stands by them, shown when she brawls alongside the Brawlers and goes to Alice's aid, against Shadow Prove.

Chan Lee first appears when she goes to Masquerade's "party" and is transported to Vestroia, falling under the control of Naga as he uses Silent Core energy to brainwash her. 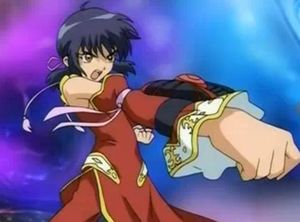 Then, she faces off against Dan, but loses. As she leaves, she thinks to herself that Dan did well, but she has a secret weapon.

She faces Dan, Runo and Marucho alongside Julio and Klaus. They lose when Marucho activates the Fire, Water, Light Triple Node and Runo's Cut-in-Saber Ability Card, making Drago evolve. They are then freed from Naga's control. Along with the others, Masquerade sends her Fourtress to the Doom Dimension, but it is later returned to her.

When the Battle Brawlers are in Vestroia, she stalls Centorrior.

She develops a crush on Joe and saves him from Hal-G using her martial arts (Dan and Julie also made fun of Chan saying that Chan and Joe were dating). At the end of the series, they are seen dating, sitting on the bench in the background while Runo and Dan were on a date.

After the events of the series, she is ranked fifth-highest in the world. 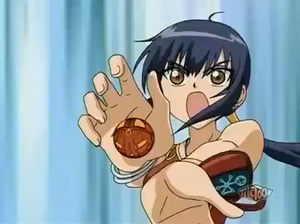 In episode 32, she makes an appearance to help Alice battle Shadow Prove. However, even after Alice destroyed Hades and defeated Darkus Fortress, they ended up losing once Shadow pulled out another Mechanical Bakugan, MAC Spider. Like when she saved Joe, she also saved Alice using her martial arts against Shadow Prove, kicking him in the kidney.

She owns a Gauntlet in this episode, although it is unknown where she got it. It is possible that it was given to her by Klaus since he told her to check on Alice.

Despite supposedly reaching third place globally, beating out even the game's creators (Dan and Shun), Chan has a terrible brawling record, losing every single on-screen brawl she is in (or having no conclusion).