Baron Leltoy (Japanese version: Baron Rich (バロン・リッチ, Baron Ritchi?)) is the youngest member of the Bakugan Battle Brawlers Resistance, a Haos brawler whose partner is Saint Nemus and who uses Piercian as his Bakugan Trap. He is one of Dan's biggest fans.

He has spiky pink/purple hair with a red headband over it.

Baron is currently 12 years old, and is the youngest and most emotional of the Resistance. Being the youngest, Baron has a lot to learn. He may be a talented Brawler, but he has a bad habit of getting too defensive or not attacking properly. At the beginning of the series Baron had a problem brawling, for fear of losing Nemus, especially after losing Blade Tigrerra to Spectra Phantom. However, this fear was overcome in episode 3 when he defeated Shadow Prove. Although he is called the weak compared to some of the other members of the Resistance, he manages to defeat three of the Vexos and also helped Dan defeat Mylene Farrow.

He is a huge fan of the Battle Brawlers and the Six Fighting Bakugan, and Mira claims he has a poster of them in his room. In spite of (or because of) this, he has a tendency to embarrass himself in front of his idols. He tends to become overly-fascinated with his objects of interest and is easily wowed, something that even Dan finds a bit off-putting.

Baron is the eldest son in a large family and is very caring for his six younger brothers and sisters. However, he and his family fears that there is not enough space and he starts plans to move out after Ace convinces him and gives him some vacant apartment information.

It is unknown how Baron came to join the Resistance, but it can be assumed that he joined after Ace did, since Baron was not with Mira when she came to recruit Ace.

Originally Baron fought with Tigrerra, but lost her to Spectra and Viper Helios. This incident clouds him with doubt in his abilities, but with a little encouragement from Dan, Mira, and Nemus, he defeats Shadow Prove in a battle and takes three of his Bakugan. In one episode, he says that he had always wondered what it would be like on the other side of the portal, which was the portal that led Runo to New Vestroia from Earth. At the end of that episode he decides to follow Dan, Mira, and Runo to Earth in order to stop the Vexos from destroying it.

Baron admires Runo as one of the six original Battle Brawlers but Runo's father doesn't like the fact that he does. He returns to New Vestroia with Dan through Dr. Gehabich's dimension transporter. He seems to be very fond of the activities done on Earth, especially by Dan (such as taking baths). In episode 20 he and Dan made it back to New Vestroia where they battled Mylene and Shadow in Beta City. Baron was defeated helping Dan and Drago, but he still was able to keep Nemus, and help Dan and Drago defeat them, destroying the Dimension Controller in the process.

When they get to Gamma City he volunteers to brawl Volt Luster, defeats him in a brawl and earning his respect. He returns to Vestal with Ace and Mira with their Bakugan, in case the Vexos will want to take back New Vestroia for themselves in the future. He then goes on TV with Ace and Mira but after that he settles down with his family. After the Vexos return, Baron brawls Hydron during a trip to the park with his younger siblings and loses the Haos attribute energy. In episode 36, he fights in a tag brawl with Shun, against Volt and his new partner, Boriates after accidentally getting involved in the battle with his little sister Maron.

When the Alternative is complete, Baro and the rest of the Battle Brawlers battle it. Four of them went inside the Alternative and destroyed the core. After that, he bids farewell and heads back to Vestal with Keith, Mira, Gus, and Ace. 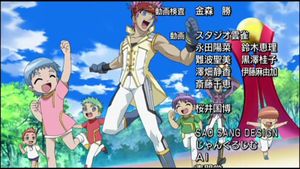 Ace chasing Baron in the Japanese ending of Episode 52

In episode 52's special Japanese ending, he is shown playing soccer with his siblings and accidentally hitting Ace with the ball. Later, Baron runs away as Ace chases him with the ball.

Baron was shown in an image along with Ace and Mira when Marucho was reflecting on the good old days of the Battle Brawlers.

When Baron and Nemus battle Aranaut in Episode 43, Marucho creates an avatar Baron which has opposite colors of Baron. The real Baron was some-what frustrated with the avatar's actions.

Although the least experienced in his team, Baron's battling record shows him to be quite a strong brawler, having only lost four times out of ten battles.