Runo's outfit in Bakugan Battle Brawlers is a yellow midriff shirt and a white skirt with a pink belt. She has maroon fingerless wrist gloves. She also has orange and white striped knee socks and brown shoes. Her hair is tied in two long pigtails.

In New Vestroia, she wears a yellow shirt and white dress with pink designs. In Mechtanium Surge, she wears a white shirt, a blue waistcoat, a red tie and khaki shorts.

Runo is a tomboy who enjoys Bakugan brawling and detests those who underestimate her for her gender. She uses a very aggressive playing style for her attribute (which occasionally lands her into trouble) and tends to get into arguments quickly, especially when it comes to Dan Kuso or Julie Makimoto. It stems from her headstrong, proud personality that makes her want things to go her way and to get attention from others.

In spite of this, she is also a caring and kind individual who tries to surpass her limits whenever she can. When she loses a large amount of Bakugan to the Doom Dimension, she becomes upset enough to nearly quit brawling. 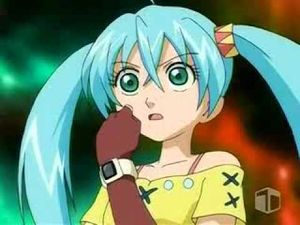 Runo helps her parents run their family business, and when Alice Gehabich comes to visit, she helps Runo's family with their restaurant, which leads to Runo becoming jealous as boys came just to see her. But after she comes home from the Doom Dimension a group of boys are happy to see her. She has a severe crush on Dan Kuso, but she won't admit her love for him. Still, when Dan is acting inappropriately, Runo does not hesitate to get annoyed. She reached 6th in the rankings.

When she arrives at the Doom Dimension and is being tested by Lars Lion she uses a younger, Illusionary Dan to brawl with Runo. It took Runo a while to realize that it was Dan since this was the first kid Runo met when she moved here but she never found out his name. It is shown she is not good at batting in baseball, but is a very good thrower, making younger Dan's hand hurt when she threw it at him. She learned through this that she needed to listen to her friends more and not to be so stubborn, which made Tigrerra evolve into Blade Tigrerra and defeat Lars Lion and Younger Dan. At the moment, Runo was with Apollonir when he challenged Drago for his test he was found by Dan when he pushed her down and  took of her mask,She had used two Mock Dragonoids for that battle. At the moment, Runo, ranked sixth, battled Dan to help Drago further evolve. Shun was originally going to battle him before but Tigrerra wanted to brawl Drago first, to which everyone was okay with.

When the Brawlers were in Vestroia, Runo, Dan, and Julie were challenged to a race to the gate to the next world by stayed behind in the race to slow down the hybrids so Dan could win the race since Drago was the strongest Bakugan they had. She and Tigrerra were then able to defeat Rabeeder by using Velocity Fang.

Runo and Tigrerra join the battle against Naga and help Drago defeat him.

In the finale of the first season, she goes on a date with Dan. 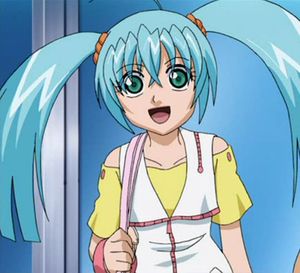 In Invasion of the Vestals, she sees Drago, but is left behind along with Julie when Drago tricks them into turning around while he and Dan went to New Vestroia. Runo gets angrier and angrier by the day as Dan never returns. So in episode 10, "Surprise Visitor," she blows it and heads over to Moscow with Julie to meet up with Alice and go through the gate to New Vestroia. Although she did so, the process was incomplete, sending Runo to New Vestroia, but leaving her without a physical body.

This causes a great trouble to the Resistance, as they, although still willingly, had to help her and due to this, was separated as Dan, Mira, and Baron having to go to Earth, and Shun, Marucho, and Ace stayed behind in New Vestroia. This one action of her has caused the Brawlers to have lots of difficulties in taking Beta City where they're supposed to win quite easily.

When Dan, Runo, Baron, and Mira go through the portal to Earth, Spectra, Gus, and Lync follow them. Spectra proceeds to kidnap Runo, only to give her back to Dan, having kidnapped her to make Dan follow him. After Dan and the other's learn the Dimensional Transporter needed to be fixed, Runo and Julie accompanied Dan, Mira, and Baron to back to their home. During the time Dan was back he and Runo showed how much they matured from the last series as they didn't fight that much but when they did they would end up laughing in the end. She gets ready to go back to New Vestroia with Dan in episode 19, but then has to stay on Earth as she needed a Gauntlet in order to go through Dr. Michael's dimensional transporter. She gets really upset by this but Dan promises he'll be back. At the end of arc 1 she got Blade Tigrerra back. When the Resistance became stranded on Earth, Baron once teased her about her baby pictures all over her parent's restaurant, however, she gets even by dragging Baron by the ear and stuffing him in the trash.

In Earth Invaders, after she mishears Dan and thinks he insulted her brawling skills, Runo goes off on her own looking for the Vexos. Mira follows her to get her to come back but they are soon discovered and battle against Mylene and Lync. Runo was able to defeat Lync, but her and Mira were soon defeated by Mylene, having Magma Wilda lose the Subterra energy. After the Resistance were thinking of how to get to Mother Palace to defeat the Vexos Runo comes to Dan to let him know that dinner is ready right when Spectra transported Dan and Drago to his ship. After Dan defeated Spectra he transported the Resistance members who have or had an attribute energy to come with him. This left Runo angry as she wanted to help out, but prayed that Dan would be careful.

In All for One, Tigrerra told the Resistance that she decided to quit brawling, for it is putting Runo and Julie in danger. So they will only brawl if it is really necessary. Even though Runo wanted to go.

Runo never makes a direct appearance this season, only appearing in a flashback[1] and a picture along with Dan and Julie.[2] 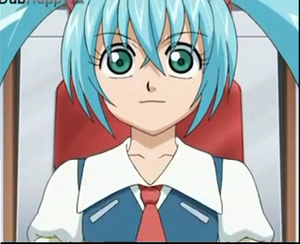 Runo made her first appearance in Back In Sync when she was shown in an image along with Julie and Dan when Marucho was reflecting on the good old days of the Battle Brawlers.

She appears in Enemy Allies, taking Mira's job after Mira overworked herself and collapsed, as she has been learning Vestal technology during the time gap. Kato picks her up, and she wakes Dan up during the battle.

In Battle for Bakugan Land, she joins with Dan and Julie to explore Bakugan Land. She also assists in sending Battle Suits in fighting Spatterix and Stronk.

In Gunz Blazing, she was going to the lab to send the Battle suits to Dan, however, she was electrocuted by Wiseman's baton, and he ended up stealing the Battle Suits. She assists in sending Battle Suits to fight Wiseman in Battle Suit Bash and Countdown to Doomsday.

She appeared in Jump to Victory along with her new partner, Aerogan. She brawled Wiseman alongside Dan, and they were victorious.

In Enemy Infiltration, she was told by Dan to stay in the HQ while the Brawlers go to Wiseman's hideout.

In Doom Dimension Throwdown, she and Mira attempt to go to Volcano Island to search Dan and the others, and Julie wants to join them, but before they even have a chance to leave, they die due to Mechtavius Destroyer destroying Bakugan City. Because the Brawlers went through the Current of Time in Blast From the Past, this event was reversed. They were revived in Beginning of the End.

In Beginning of the End, she was seen talking to Mira and Julie that she will stay back to send the Battle Suits just in case they need it. She does so.

In End of the Line, she is reunited with the rest of the gang and throw a party for Dan, but is upset when he doesn't show up.

Runo as she appears in Bakugan: Battle Trainer

In Bakugan Battle Brawlers: Battle Trainer, Marucho sends Dan to the Caring Zone after it becomes apparent that the transporter has given Dan temporary memory loss. In the training room, Runo gives him a tutorial on how to play and care for his Bakugan.

Runo often attacks her enemies head-on instead of devising strategies to beat them, which sometimes lands her into trouble. She rarely works with strategy, but when she does her enemies are in serious trouble.

Runo's style of battling is not always bright or well-thought out, as her personality is a little rash and stubborn, however during such times or when she carefully plans out her tactics, her strategies are effective often resulting in her victory.