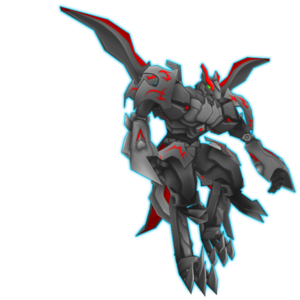 The Mechtogan (メクトガン, Mekutogan?) are creatures that appear in Bakugan: Mechtanium Surge. They are supported by Mechtogan Activators. As their name suggests, they are bio-mechanical creatures. It is also shown that normal attacks usually do not work on Mechtogan due to their special shield in the anime. They are a "physical manifestation of an ability," or a Bakugan's excess energy taking a corpereal form. Mechtogan are created when a Bakugan and a brawler fall out of sync, but recent episodes show that Mechtogan can be controlled when Bakugan and Brawler regain sychronization, and summoned when they have a large amount of energy and releases it to take the form of a Mechtogan.

Mechtogan first appeared as an entity released accidentally by Dan, that wreaks havoc whenever Drago battles. In Mechtogan Mayhem, it is revealed that despite their mechanical nature, they are fully sentient beings.

In Chaos Control, it was shown that Drago had to tame Zenthon in order to obey his commands. In the anime, Some Mechtogan may need to be tamed/broken in before they will obey you. It is similar to what cowboys would do to break wild stallions in.

Mechtogan in the anime sometimes closely resemble the appearance of the Bakugan that spawned them, hence with Zenthon/Drago, Taylean/Silent Strike and Razenoid/Dreadeon.

In order to control a Mechtogan in the anime, a brawler and Bakugan must be in sync with each other, only then will the Mechtogan will be able to communicate with them and fight at their leisure. There is also another, albeit forced, way of controlling Mechtogan through special braces made by Mag Mel, however these forced methods cause strain on the brawler and some take up a lot energy just to summon them.

According to Coredegon, if a Mechtogan is mutated, it can survive without its creator. It was revealed by Genesis Dragonoid that this mutation was because of Fury's violent and destructive intentions from being banished to the Doom Dimension.

According to Genesis Dragonoid, Mechtogan are also born from desire to come together with others.