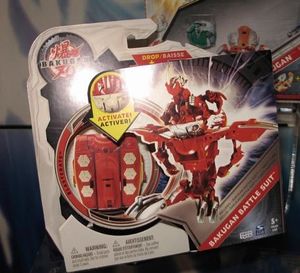 Bakugan Battle Suit is a product in Bakugan: Mechtanium Surge. It is like a Mobile Assault.

To play a Bakugan Battle Suit, place your battling Bakugan on in to transform it, much like one would with a Bakugan Mobile Assault. The Battle Suit adds a G-Power bonus printed inside to the attached Bakugan during battle.

Much like Battle Gear, Battle Suits come with a blue-backed Reference Card, which applies an additional effect when it is put into play. Battle Suits can be used on any Bakugan as long as both of their Attributes match.

Battle Suits also have holes that allow BakuNano to be attached.