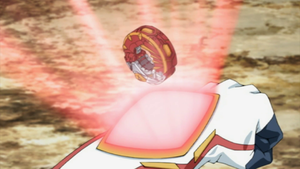 Unlike other Battle Gear, the Bakugan are attached to them, making it compatible to any Bakugan. When a Bakugan is placed on an closed BMA it opens up. Also, they have an attribute that must match the Bakugan using the BMA. A maximum of two BMAs can be used in your force (Trap/BMA, Battle Gear/BMA, Mechtogan/BMA, Mechtogan Titan/BMA or BMA/BMA). They each come with a Reference Card listing what type of Gate Card (Copper, Silver and/or Gold) they can be used on and it's special abilities. 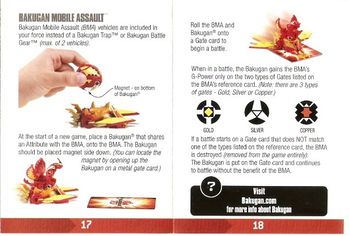 You put the Bakugan on the Mobile Assault Vehicle, then roll it onto a Gate Card. The Bakugan gains the BMA's G-Power only on the two types of Gates listed on the BMA's reference card. If the BMA is used on a Gate Card NOT specified by the Reference Card, the BMA is destroyed (removed from the game entirely) and the Bakugan is used in normal battle. If then your Bakugan doesn't match the attribute of the mobile assault, it gets destroyed also. On Bakugan Dimensions, they are used as normal Battle Gear. Also, BMA's are counted as Battle Gear attributes based on trim color. Mobile Assaults can be used with clear and translucent Bakugan, but the Bakugan has to maintain the same attribute as the Mobile Assault.