The Bakugan Attributes are representative of the Bakugan's elements.

In the original system introduced in Bakugan Battle Brawlers, Vestroia's system was split into six planets of Pyrus (fire), Aquos (water), Ventus (wind), Subterra (earth), Haos (light), and Darkus (darkness). There are a few Bakugan who don't have an attribute and others who have an uncontrollable and forbidden power. This system carried over into BakuTech! Bakugan, though the series is independent from Battle Brawlers.

A new system has been introduced in Bakugan Battle Planet. It is largely identical to the first, but the Subterra attribute has been replaced by Aurelus, while Ventus now represents both earth and wind as nature. Attributes are now known as Factions.

While not an attribute in itself, Clear Bakugan exist. In gameplay, they take on the attribute of the opponent's Bakugan. In anime there are attributeless bakugan who called "The White Ones" 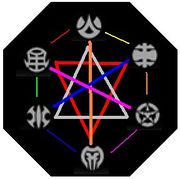 All of the Attributes are put on a hexagonal circle and connect with each other in some way, allowing certain Ability Cards to activate and make Bakugan more powerful. These relations have only been used in the Anime and Video Game.

In Bakugan Battle Planet, "Attributes" are now called Factions. All five original Attributes from the Legacy Series return except for Subterra, which according to Spin Master was "unpopular", so a new Faction called Aurelus has taken its place. Despite Subterra being removed, the "Earth" aspect of the Attribute has been merged with the Ventus Faction.