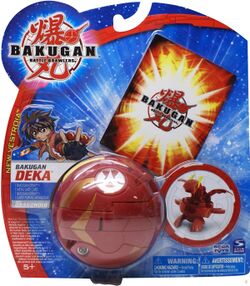 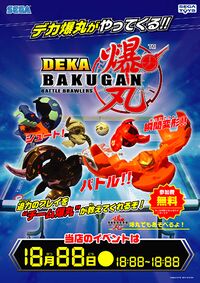 Like the normal-sized Bakugan, they open-up when attracted to a metal surface. Besides normal Bakugan Deka, there are Deka Traps and Deka Gear were later introduced in Bakugan: New Vestroia, and Bakugan: Gundalian Invaders respectively. Dekas also returned in the reboot, Battle Planet. A unique Bakugan that is Deka sized appears in BakuTech! Bakugan Gachi, known as DraThron.

So far these are the Deka Bakugan that are known to exist:

In this series, the Deka Bakugan Traps were introduced.

In this series, the Deka Bakugan Battle Gear were introduced.