Later in Mechtanium Surge, a newer model of the BakuMeter is created, containing more features than the previous version.

The Gundalian Agents have additional features in their BakuMeters, such as using it to stop time like a Gauntlet, or using it to open a doorway into the Twelve Orders' secret hiding spot in Bakugan Interspace. 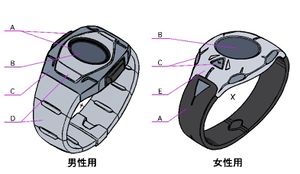 The Mechtogan Control Bracelet used by Anubias and Sellon bear resemblance to the BakuMeter, but are worn opposite of the BakuMeter rather than being an integrated part of it.

Also, a prototype of a third version that would have the function to summon Battle Suits was designed by Mira. The only one to use this BakuMeter was Wiseman.

Real-life versions of the original BakuMeter were sold at Toys 'R' Us for $20, and at Wal-Mart for $25. Like the Gauntlet, they were not made to actual size, being larger than the versions shown in the anime.

The BakuMeter had code integration with Bakugan Dimensions; the ten-digit DNA Code found on each Meter unlocked ten three-digit codes, which could be input in the DNA Code Entry Console. This also unlocked the "Proud BakuMeter Owner" achievement.

The newer BakuMeter models were never made into toys.

DNA Codes in the BakuMeter[edit]