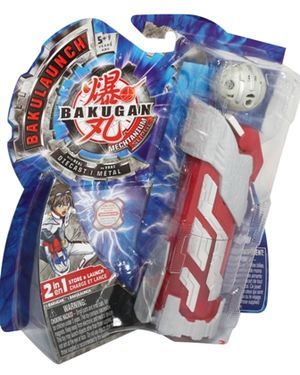 BakuLaunch is a released accessory that looks to be a hand launcher and BakuCapsule rolled into one. So far it has been seen containing Pyrus and Haos Meta Dragonoids. It can hold up to two B2 and classic sized Bakugan by inserting it through the bottom. It can twist apart for a launcher and a canister. A button activates the launcher by jutting forward.

The BakuLaunch made its Anime debut in Unlocking the Gate of Bakugan: Mechtanium Surge. It was used by Rafe to launch Wolfurio into a hoard of Chaos Bakugan.