Wiseman (ワイズマン, Waizuman?), was the second identity of Coredegon and the main antagonist in the second arc of Bakugan: Mechtanium Surge. He was at first thought to be Gunz Lazar in disguise, but it was later revealed that he was Coredegon and had copied Gunz's looks and mannerisms as a red herring to fool the Brawlers.

Wiseman is Coredegon in disguise, whose purpose was to destroy Bakugan City and break the alliance between humans and Bakugan. He used the Nonet Bakugan, who were imprisoned in the Doom Dimension by Genesis Dragonoid, but they betrayed him after he revealed his identity. He also has Slycerak, Exostriker and Mandibor that form Mechtavius Destroyer with him. 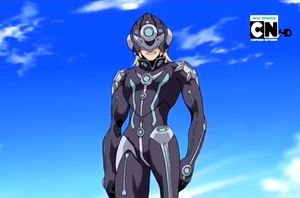 In Evil Arrival, he appeared at the end of the episode, laughing.

In Wiseman Cometh, he freed the Nonet Bakugan from the Doom Dimension and tricked them into helping him re-summon Mechtavius Destroyer so he could defeat the Battle Brawlers. He ended up getting defeated when Dragonoid Destroyer was summoned and helped Jaakor and Reptak boost their power.

In Combination Impossible, he used Balista and Worton against Radizen, but lost.

In Enemy Allies, he and the other Mechtogan fight the Battle Brawlers but end up losing.

In Battle for Bakugan Land, he fought Dan using Scorptak. He was winning until Dan used Drago and Reptak's Battle Suits, and Dan won the battle.

In Gunz Blazing, he disguised as Gunz Lazar to confuse the Brawlers that he is Gunz. He stole some Battle Suits' data.

In Battle Suit Bash, he fought the Brawlers using Betadron, Kodokor, and Mutabrid. It was revealed in the end of the episode that he isn't Gunz. He's a mysterious being who stole Gunz's appearance and battling style.

In Countdown to Doomsday, he engaged all the Nonets in battle against the Battle Brawlers and earn his first win after he summoned Mechtavius Destroyer.

In The Eve of Extermination, he used all the Nonets again in battle against the brawlers and summoned Mechtavius Destroyer, but they were defeated by the new Mechtogans that Dragonoid Destroyer summoned.

In Jump to Victory, he used Worton and Balista to battle against Drago, Reptak and Aerogan, but they were defeated again by Aerogan and Dragonoid Destroyer's attacks. 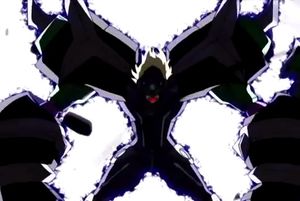 In Gunz Lives, he used the Nonets to battle against the Brawlers in his hideout and when the Nonets used their energy to battle them, he used it to reveal his true form which is Coredegon.

In Evil Evolution, he transformed again from Coredegon and tells Gunz the real story on how he copied his appearance. He also told the Nonets the fate of Balista and left his identity as Wiseman, taking off his helmet and turned into Coredegon.

Despite being a strong brawler, Wiseman has a terrible brawling record, winning only two battles out of twelve brawls.