Mira Fermin (ミラ・フェルミン, Mira Ferumin?)[2][3] is the 16-year-old[1] Vestal leader of the Bakugan Battle Brawlers Resistance and a Subterra brawler. Magma Wilda is her Partner Bakugan and she uses Baliton as her Bakugan Trap.

She is the daughter of Clay Fermin and the younger sister of Spectra Phantom (Keith Fermin). When she first played Bakugan, she thought of them as just unintelligent creatures. That was until she witnessed Alpha Hydranoid, while being tortured, speak out in vengeance. It was then that she realized that Bakugan were alive, so she formed the Resistance with Baron Leltoy and Ace Grit.

Mira's height makes her look young, though she is 16 years old. She has short orange hair, wears a small silver jacket, white gloves, blue earrings, has sapphire blue eyes, and wears a rouge jumpsuit with uneven sized boots and leggings. She sometimes wears a yellow helmet with her matching motorcycle, and a locket with a picture of her brother inside.

In Mechtanium Surge, Mira wears a white track jacket with blue stripes over a blue dress, as well as a black collar. Her hair is in its original style.

Mira's personality can be described as a stubborn tomboy, much like Runo Misaki. Mira has shown that she could act girly, when she fooled some guards by acting like a crazed fan girl while she, Baron Leltoy, Dan Kuso, and Marucho Marukura were looking for the Dimension Controller in Alpha City. She could also be flirty when she wanted to be as shown the day she saw Alpha Hydranoid being tortured when she flirted with the guards at her father's lab.

She will do anything to get her brother back, even if it means going off on her own and getting in danger. It is because of her desire to find her brother that she gets into fights with Ace a lot, like Dan and Runo do.

As the Resistance's leader, Mira always tries to get the team moving. She's the one who pushes Baron to battle strong and also attempts to get things straightened out.

Mira formed the Resistance after witnessing the tortured Alpha Hydranoid speak out in vengeance to the invaders, to free all the captured Bakugan from Prince Hydron and the Vexos.

In the first episode, Lync Volan and Volt Luster ambushed and challenged them to a brawl. At first she had the upper hand, until Volt immobilized Wilda. With the help of Dan and Drago, they won the brawl and Mira offered them to join the Resistance, which they accepted.[4] She takes them back to their base to introduce them to Ace and Baron; while Baron was excited to meet the famous Battle Brawlers, Ace was less than pleased. When Marucho goes missing, she goes and searches for him. Upon seeing a disguised Shun Kazami defeat Mylene Farrow, she believes he might be her brother. On the way to Beta, Gamma, and Alpha City, she formally meets Shun, who agreed to join in hopes of finding Skyress. After when they freed the Bakugan the Vexos came out of hiding and made the BTS.

Mira meets the brawlers on Earth for a visit, but soon returns to Vestal, this time with Dan and Marucho, and they meet up with Ace and Baron at Klaus Von Hertzen's estate. She also has a brother that she desperately wants to find after he disappeared during Hydranoid's rebellion. Although she is the leader, she is not necessarily accepted by the others, as she has a small tendency to go off on her own. She prefers the Subterra attribute. Her main Bakugan is Subterra Magma Wilda and her Trap Bakugan is Baliton.

On Earth, Mira proposes a battle Spectra and if she's victorious, Spectra will be unmasked. If she loses, however, she has to join the Vexos, and even battle her own friends. She told herself in the beginning of that episode that her hero was always her brother, Keith, but forced her to change her mind about it after Spectra unmasks himself in front of her, revealing that he was her 'hero'.[5] Baron described her as 'intense'. She betrays the Resistance as she says that she wants to stay with Keith once telling the others on Earth, Spectra is her brother.[6] She returns to New Vestroia through the portal Apollonir opened with Spectra, Gus and Lync after revealing her betrayal.

Although she joined the Vexos, she is really wondering what Spectra is up to, challenging her brother to a battle and if she wins, she goes back to being with her real brother and not Spectra; however, if she loses, she will have no choice but to serve Spectra. She later lost the brawl, showing regret as she says, "I'm sorry my friends," at the end of the episode, and is also seen crying as she has no choice but to be an enemy to the Resistance. She later returns to the Resistance. She returns to Vestal with Ace and Baron and their Bakugan, in case the Vexos will want to take back New Vestroia for themselves in the future.

She faced Spectra Phantom with Dan Kuso and Marucho Marukura and won. Although Helios managed to defeat Wilda and Elfin, Dan and Drago still won the battle for the three of them.[7]

When Runo left the mansion, Mira followed and were challenged by Mylene and Lync to a brawl. Although Wilda put up a good fight she lost her attribute energy to Mylene and Lync when Macubas activated ABSIDS TR 2.[8]

Mira battles Prince Hydron along with Dan Kuso. During the battle, she is blown back and knocked unconscious. She woke up when the other Resistance members arrived.[9]

After Spectra left the Resistance, Mira just about gave up hope on Keith. However, she and the rest of the Resistance tag along as Dan goes to battle Spectra. When Spectra lost, he joins the Resistance, taking off his mask. Once she realizes that Keith's personality has returned, they have a mini reunion. In the preview for episode 45, it shows them spending time together.

She was nervous at first because she wasn't sure if it was a dream or not (Keith coming back). They greet each other good morning and spent time together. Her relationship with her brother seems to get Ace jealous, though she doesn't realize that. Mira is worried when they had to analyze Drago for his own Battle Gear. She was worried that Keith would not come back. She seems to also listen to her big brother. She wants to get her father to leave the Vexos. She is held hostage when Mylene manages to grab hold of her. Mylene demands that they will release her if they give her the data. Keith willingly agrees to the demand, worried for his sister. But he actually manages to trick Mylene and Shadow into Bakugan Interspace. She battles alongside Keith (as Spectra) against Mylene and Shadow Prove. When Keith assists her (he already defeated Shadow), she tells him she can handle it, and he backs out. She manages to defeat Mylene, who throws a grenade trying to bring them to another dimension, but the grenade causes Bakugan Interspace to crash, trapping all four inside.[10]

Keith and Mira barely make it out of the Bakugan Interspace was it was collapsing on itself. Marucho manages to get them out on time, right after the floor beneath Mira and Keith break.[11]

The Resistance members follow Keith back to New Vestroia, seeing both Keith and Gus already in the fight with the Alternative. As the fight continues, Keith and Mira manage to find a way into the Alternative. They find their father who was insane and wanted to protect his creation. When the Resistance members managed to destroy the power reactor of the Alternative, they managed to escape, but not their father who saves Mira from being crushed. They return to the Vestal Destroyer as the Alternative blows up (with Professor Clay, King Zenoheld and Prince Hydron). The Resistance, along with Gus, bid farewell to the Human Resistance members as they all returned to their own homes. In the Japanese Ending of Episode 52, it is revealed that she returned to her life with her brother. Mira gave him a glass of juice and Keith receives it as she smiles at him and he smiles back while Wilda and Helios watch them. 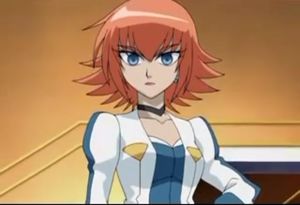 Mira reappeared in an image alongside Ace and Baron when Marucho was reflecting on the good old days of the Battle Brawlers.[12]

She appears to cheer Dan on in the tournament, saying "I told you I'd come back!". She now owns Roxtor.[13]

Mira was asked by Radizen to help him find a way to combine but she didn't have a way to help him. She later followed Marucho to his father's power plant and sees him fighting Wiseman. She watched as Roxtor combined with Radizen to defeat Wiseman's Bakugan.[14]

Mira was sent back to HQ and told Dan about Defendrix's EM Pulse that he could have potentially used to retrieve the stolen Battle Suits.[16]

Mira is seen analyzing the data of the Nonets and evil Mechtogan with the Brawlers.[17]

Mira examines the injured Dragonoid Destroyer and points out that he was holding back 30% of his energy in his last battle. After Shun and Marucho spawn Flytris and Thorak during a battle with Mechtavius Destroyer, she points out that 20% of that reserve energy is gone, and wonders how he will use the last 10%.[18]

Dan, Shun, and Marucho tell Mira and Runo to stay at HQ to man the Battle Suits if they call for them while out at Volcano Island.[19]

After a while and no calls, Mira and Runo starts to pack up one of Kato's helicopters to find Dan and the gang to see how they're doing. Julie goes to join them, but before they have a chance to leave, Mechtavius Destroyer returns and destroys Bakugan City, killing everyone inside.[20]

These events were reversed when the Brawlers went through the Current of Time.[21]

Mira and Runo attempt to leave once again. Dan calls them and talks about the situation, and Mira leaves with Julie to Volcano Island. Mira pilots the helicopter and while Julie reports. Mira also notices that Dragonoid Destroyer is still only using 90% of his energy.[22]

Julie begs Mira to fly the helicopter closer to the battle, but she refuses due to danger. She flies everyone back after the battle and watches Dan's battle with Gunz. After this, she and her friends throw a party for Dan, but he doesn't show up.[23]

Overall, Mira is a good brawler; she was able to defeat three members of the Vexos by herself. However, most of her wins earned comprise of her tagging up with other teammates. For example, Mira wasn't able to defeat her brother without the help of two other teammates in a 3v1 battle; that said, he is the best brawler among the Vestals, so it may be more an indication of his skill and less an indication about her brawling ability.

The meaning of "Mira" in Hebrew is "rebelliousness", which can relate to Mira's rebellious personality and how she leads the Resistance.