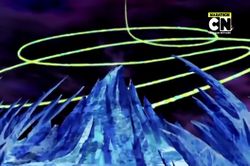 Current of Time in the Doom Dimension

The Current of Time is a time warp discovered by Worton in the Doom Dimension. It is a vortex of energy where the past and present collide, making a spiral in the time-stream.

The Current of Time is a time warp located in the Doom Dimension that allows any number of people and Bakugan to go back to a point in time that they all have a connection to. Because of its immense energy and the ripples it makes in the space-time continuum, psychic Bakugan such as Worton cannot use their powers to guarantee exactly what will happen. While going through the time warp, each user looks at a past memory generated by the current while it tries to pick a destination. The users can only stay in the past/future if they have enough power to do so. Sacrificing energy to the time warp can temporarily pause the current in order for others to go back into a specific point in time.

When Worton went back to the Doom Dimension between Evil Evolution and Doom Dimension Throwdown, he accidentally discovered the Current of Time. He was later sent back in time before Balista was killed and saw himself talking to Balista from The Eve of Extermination. Once he realized he was sent back in time, he tried to warn Balista of his upcoming demise, but didn't have enough energy to keep the time warp open.

In Blast From the Past, Worton told the Brawlers of the time warp and they all went inside. Worton and Betadron sacrificed themselves to keep the current open long enough for them all to get through, with Drago promising Betadron that they will succeed in defeating Mechtavius Destroyer once and for all.