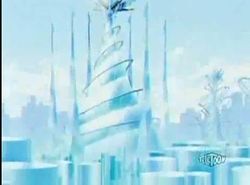 Neathia (Japanese version: Roteldia (ローテルディア, Rōterudia?)) is the Neathians' home world in Bakugan: Gundalian Invaders. The Queen is currently Fabia Sheen while the former queen was her older sister, Serena Sheen, but she gave up the throne to become the Ambassador for Neathia and Gundalia. Also, there was a powerful object called the Sacred Orb and the "Element", a portion of the Sacred Orb's energy, within the city of Neathia. As shown by Linus, Neathians have an ability that allows them to look exactly like a human. Their real forms have diamond-like eyes and blue skin. Most of the Neathians are weak brawlers, because they got wiped out by the Gundalians. It is also the home planet of several powerful Bakugan whom ancestors come from Old Vestroia. It seems that most Neathian brawlers use Haos attributed Bakugan. Nearly all objects are chrome. Neathia and Gundalia were initially one planet.

The Sacred Shrine is the place where the Sacred Orb used to be held (now located in New Vestroia). The entrance was guarded by a menacing gargoyle to frighten off burglars (which was Dragonoid Colossus in a stone statute).

Bakugan Dimensions was updated and now allows the player to access Neathia. To get to Neathia, you must first head DownTown and go to the plaza. Then to the North-West, there is a "StarBust" Portal. Neathia contains 4 Areas: Plaza, Palace, BattleField and the Gundalian Ship and a secret room: Sacred Orb.