Serena Sheen (Japanese version: Celine Sheen (セリーヌ・シーン, Serīnu Shīn?)) is the Ambassador of Neathia, and the former Queen of Neathia. Her younger sister is Fabia Sheen, who is the reigning queen as of the end of Bakugan: Gundalian Invaders.

Serena has a slender physique and has dark blue, short hair with turquiose eyes and a pinkish skin complexion. In Bakugan: Gundalian Invaders she wears a white royal dress, with robes, a crown, and silver earrings. In Bakugan: Mechtanium Surge, Serena wears a similar dress to the one she wore in Gundalian Invaders, but with more robes and broader.

Serena has great leadership skills and often makes wise choices, not easily yielding to pressure or threats and able to motivate and reassure her people. Even when faced with an armed Barodius without any known brawling ability of her own, she fearlessly stands up to him.

She is loyal to the Sacred Orb and Neathia, and also loves her sister very much and tries to protect and guide her. Like Fabia, she is wary of others, as she tests the Brawlers to see if they're worthy and honest. She's selfless and would give her life for those she cares for.

In addition to being Fabia's older sister, she is the acting queen of Neathia. Not one to crumble under pressure, Serena goes and sends Fabia to Earth to get help against the Gundalians. In addition, she calls the ancient and legendary "antimatter energy" to cover her home world. But the Emperor of Gundalia uses his Bakugan, Dharak, to break down the shield to steal and absorb the energy's power. Serena's biggest challenge is to keep Neathia running smooth and keep the people calm and safe while waiting for Fabia and the Battle Brawlers to help destroy Barodius and his Twelve Orders.

In Dream Escape, she and Captain Elright wonder why the Gundalians hadn't attacked Neathia in some time. While Elright takes that as a good sign, she is not so sure. Her suspicions are correct when Barodius himself attacks Neathia and easily breaks through their Third Shield with a new, more powerful Dharak. She immediately orders the evacuation of all citizens to the emergency shelters below the castle and, after they were safely out of harm's way, all she could do is look on in horror as their home was overrun and destroyed.

In Gundalian Showdown, she tries her best to calm her people's fears by telling them that the Castle Knights would protect them. However, she thinks to herself that it is not the Sacred Orb that protects them but the other way around.

In Code Eve, she is confronted by Emperor Barodius himself, who broke through all of the Castle's defenses. He demands that she hand over the Sacred Orb, but she refuses, calling him crazy to think she'd ever do something like that. He counters her by remarking that it was not a request but an order. Still refusing to listen, she rises from her throne and makes it clear to Barodius that if he wanted the Sacred Orb, he'd have to go thought her first, which he was more than willing to do. Before he could strike her, Dan rushes into the room and nearly tackles him when the Sacred Orb warped them both away right in front of her eyes.

In Destiny Revealed, she later appears alongside Nurzak, the Brawlers, and some Castle Guards to bear witness to the aftermath of Dan and Barodius' final battle for possession over the Sacred Orb, which ended in Barodius' defeat. Unwilling to accept defeat, both Barodius and Phantom Dharak make one final attempt to gain the power of the Sacred Orb, by jumping in after it, but are unable to handle the power and are both destroyed/absorbed into the Orb. Afterwards, she thanks Dan and the Brawlers for everything they've done, for her and her people, and agrees with Nurzak about making peace between their kind. Believing that this war has taught them all about the importance of peace, she sees everyone off. 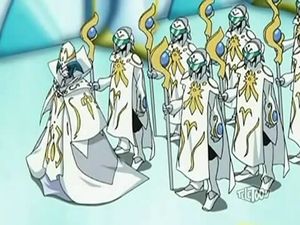 In Gundalia Under Fire, she is shown to be the Ambassador of Neathia.

Serena makes an appearance in the game as an NPC and, unlike in the anime, can brawl against the player.

Note: Serena had the same Bakugan as Fabia on Bakugan Dimensions.